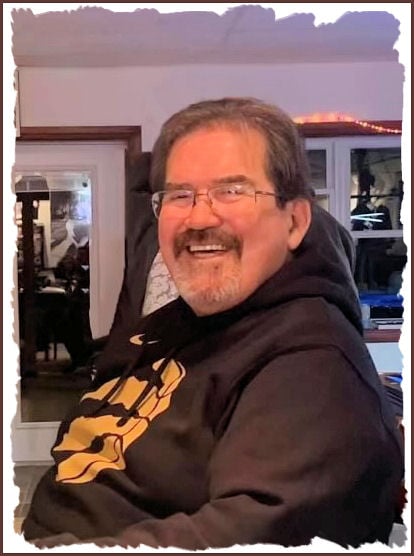 Ed Bisson passed away to the spirit world on Monday, January 16, 2023 at the Mindemoya Hospital. Life partner of Linda Bisson (nee Hawley). Beloved father of Andrew Bisson, Sarah-Lynne Redgers (Ivor) and Matthew Bisson. Ed was as proud of a grandfather as you could ever meet. Grandfather of Julia Pine Bisson, Colton Redgers, Delaney Redgers and Eric Redgers; he cherished every moment of being a grandfather. Dear son of James and Anne (nee Migwans) Bisson (both predeceased). Loving brother of Audrey and predeceased by siblings Gus, Timothy, Ken, Norma, Rick and Brian Bisson. Godfather to Dawn Bates. Will be greatly missed by family, friends and community in M’Chigeeng First Nation and Port Hope, Ontario. Survived by many cousins, nieces and nephews. Special friend and brother to the Ense family in M’Chigeeng. He was well known for his love of sports, for playing, watching and coaching. He coached his two sons in both soccer and baseball. He enjoyed hockey in his younger days, loved to watch his niece Cassandra and nephew Sonny play hockey, and enjoyed golf with his son Andrew, brother Brian and dear friend John Ense (especially the 6th hole at Brookwood Brae). He was especially known for his basketball prowess in his high school days, as well as the stories of his exploits in basketball that seemed to become larger every time he told them. His favourite sports teams were the Toronto Raptors, Toronto Maple Leafs, Toronto Blue Jays, Toronto Argonauts and the Buffalo Bills. Many of these teams taught him and his family valuable character-building lessons. Ed was also renowned for his sharp and witty sense of humour, and for his deep love of music, introducing his three kids to great music throughout their lives. Ed worked for Via Rail for over 20 years, before beginning work in the grocery industry, which eventually brought him back to Manitoulin Island after spending over 30 years living in Port Hope, Ontario. He also relished the opportunity to give back to his community through becoming an employment counsellor in M’Chigeeng. Ed was known as a great manager who cared immensely about his employees. Ed left an impression on so many people he encountered, and he will be sorely missed by so many people. Baa maapii kaawaabamin. Friends and family gathered on Wednesday, January 18, 2023 from 6 pm at the M’Chigeeng Community Complex, Wake was held at 7 pm. A Wake ceremony will also be held on Thursday, January 19, 2023 at 7 pm. Funeral Mass was on Friday, January 20, 2023 at 11 am at the Immaculate Conception Church, M’Chigeeng. Burial followed in the M’Chigeeng First Nation Cemetery.