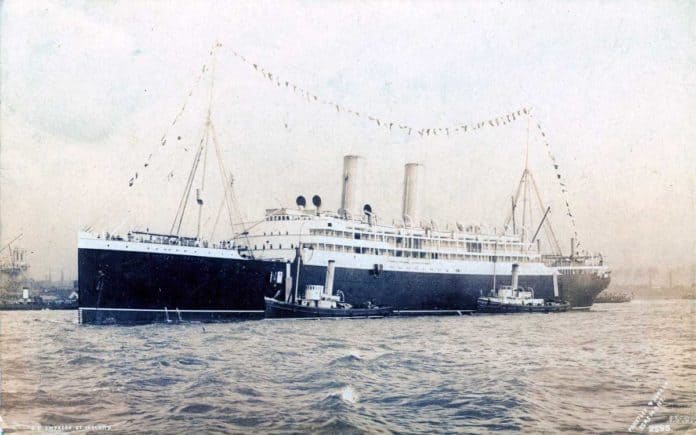 KAGAWONG—The Old Mill Heritage Centre prides itself on being a maritime museum and each year curator Rick Nelson scours history for a fitting theme. This year, the museum will focus on the Empress of Ireland and the maritime disaster that has come to be known as Canada’s Titanic. To that end, the museum has secured numerous artifacts from Gatineau’s Museum of History but even more exciting is the museum has secured many items from the private collection of Guy D’Astous.

Mr. D’Astous has dived on the wreck of the Empress of Ireland 35 times and has collected innumerable items associated with the disaster over the past three decades.

“We started on this project three years ago,” said Mr. Nelson. “The collections were supposed to go on display last year, but then the pandemic hit.”

While no Islanders’ lives were lost in the disaster, according to newspaper articles from the time, several Sudbury residents were among the 1,012 passengers and crew who perished when the Norwegian collier (coal carrier) Storstad collided with the liner while navigating thick fog in the Gulf of St. Lawrence during the early hours of May 29, 1914.

It took barely 14 minutes for the Canadian Pacific Railway ship to founder and barely 465 passengers managed to flee the ship, despite the presence of more than enough lifeboats, making the loss of the Empress of Ireland Canada’s worst peacetime disaster. The Titanic had sunk two years earlier.

Mr. Nelson pointed out that the Old Mill Heritage Centre museum has featured a number of maritime losses over the years, including the loss of Lasalle’s Griffon, the Franklin Expedition and the Northwind.

“History in Kagawong (an annual history lecture series held at the Park Centre) has often explored the shipwrecks of the Great Lakes and the story of the Empress of Ireland has always been on our radar,” explained Mr. Nelson. “It is an incredible story that impacted the lives of so many people in Canada.”

Mr. D’Astous first discovered his passion for diving as a child watching the famous documentaries of French underwater pioneer Jacques Cousteau. “It always struck me and I decided right then that was something I wanted to do,” he said. He began diving in 1986 and, although he never became a commercial diver, he eventually became an instructor.

“It took me five years before I felt comfortable enough to dive the Empress of Ireland,” he said. “It is a challenging dive and not something for the inexperienced diver. I bought my Zodiac in ‘89-‘90 and that enabled me to reach the site.”

Mr. D’Astous was first attracted to the wreck due to its accessibility. “It is one of the big three,” he explained. “There is the Titanic, the Lusitania and the Empress.” The first lies far too deep for free diving, the second is located thousands of kilometres away. “The Empress is only five miles off shore.”

But the currents there are swift and treacherous and the visibility variable.

“You follow a rope down and when I was descending I was like a flag on a pole during a strong wind,” he related. “On my first dive I couldn’t see anything until I reached the wreck.” His first encounter with the hull was with his nose. “I literally bumped into it with my face,” he laughed.

Clambering up the rope to the rail of the ship (it lies on its side on the seabed) visibility increased dramatically. “I could see about 25 feet and the deck, it’s teak and railings, stretched out in front of me,” he said. He was hooked.

Mr. D’Astous could only spend a few short minutes on the wreck as he was wearing a single tank of oxygen. On subsequent dives he was carrying two, but still could only dive once a day.

“The nitrogen builds up in your blood at those depths,” he explained. “You have to wait at least 24 hours for the nitrogen to clear your bloodstream.”

Although he has brought a few small items to the surface himself, nearly all of his collection of artifacts from the wreck were purchased from other private collections.

Mr. D’Astous will be bringing much of his collection up to the Old Mill Heritage Centre in mid-May, where museum staff will curate the displays in time for the traditional long weekend in May opening.