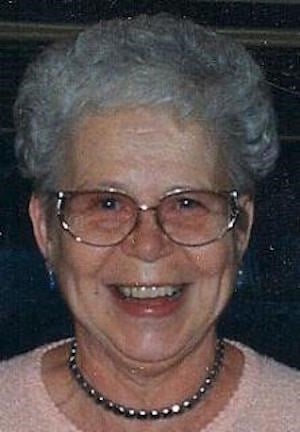 September 30, 1929 – January 1, 2018
Eunice Irene Muir passed away peacefully at Royal Victoria Hospital in Barrie, Ontario, in her 89th year, and is now at rest in the loving arms of Jesus, her Saviour. She was predeceased by her husband Raymond Muir (1993). Loving mother of Ross (Diane) of Waterloo, Ontario (formerly of Little Current, Ont.). Cherished grandma of Alec (Amy) of China, and special great-grandmother of Emma. Eunice was born in Mills Township, Manitoulin Island, Ontario, to Harvey and Alice Grace (nee Williton) Robinson, both predeceased. Also predeceased by her sisters Marion (late husbands Arthur Langton and Osborn VanHorn), Betty (late husband Jack Munson), Marlene (late husband Dalton Williams), and Alice; and brothers Clifford (late wife Thelma), and Alvin (late wife Bev). Survived by her brothers Michael (Gaye), and Garry (Sarah), both of Vancouver Island, B.C. Eunice will be sadly missed by her many nieces, nephews, and her many friends both near and far. After attending school on Manitoulin Island, she took training to become a registered nursing assistant, and worked at the Ontario Hospital in Orillia, Ontario, in the early 1950s and at Leisureworld in Barrie from the 1970s to the 1990s. She married Ray in the fall of 1954 in Angus, Ontario, and moved to Barrie, where she spent the rest of her life (when she wasn’t travelling across the continent on bus tours). Besides being a devoted mother and grandmother, Eunice put her heart and soul into various ministries at Emmanuel Baptist Church in Barrie, beginning in 1957, serving in the nursery, marking children into Sunday school, the Women’s Missionary Society, and in her later years, as part of the seniors group, where she was particularly fond of shuffleboard. After nearly 60 years on Penetang Street, heart problems required Eunice to give up her home, but her last two years at Simcoe Terrace in Barrie were anything but dull, earning her the moniker of “belle of the ball” by some of the staff for her active participation in as many activities as she could handle (and then some). Special thanks to the staff at Simcoe Terrace and RVH, and to Dr. Benjamin Burt for their exceptional care; and to Eunice’s friends Wib and Joan Pearson (who were with her when she passed) and her long-time neighbour Frank Reynolds for their above-and-beyond-the-call-of-duty support of Eunice and her family over her last years. A memorial service will be held at the Jennett Funeral & Cremation Centre (152 Bradford Street, Barrie) on Wednesday, June 20th, 2018, after Alec and Amy return from China: visitation at 1:00 p.m. until the time of service at 2:00 p.m., reception to follow. As expressions of sympathy, memorial donations may be made to the Heart and Stroke Foundation or the Gideons International in Canada.