MANITOULIN – The results are in and your community newspaper has done it again, taking home three awards from the 2019 Ontario Community Newspapers Association (OCNA) Better Newspapers Competition.

The annual awards gala is typically held at the OCNA’s spring convention in April, a chance for Ontario’s community newspapers to show their might, but this spring being the spring it was, the gala was put off and an online issuing of the awards was instead made on Friday, July 24.

The Expositor Office tuned into the Friday announcement, watching with bated breath as the best and brightest of community and student journalism and creative content was highlighted.

This year Expositor reporter Warren Schlote took home two awards; a first for feature writing for his story ‘Newfoundland tradition survives in the North Channel,’ which introduces the reader to Dean Riggs and the 24-foot punt his father Andy built by hand, and a second place for ‘most creative grip and grin’ (‘grip and grin’ is the newsroom term for the typical ‘handshake and smile for the camera’ shots). The award-winning photo captured the ribbon-cutting ceremony of Escarpment Biosphere Conservancy upon its purchase of Willisville Mountain and it is atop this mountain that the photo was taken.

“Warren Schlote’s beautifully written feature story brings its readers on the water with the boat-builders and reveals their personalities while adding interesting technical and historical information into the mix,” wrote judge Gail Sjuberg, editor of the Gulf Islands Driftwood of Salt Spring Island, BC.

“I was not expecting to take home a first-place finish from the awards ceremony, let alone a first and a second place across the two categories,” said a humble Mr. Schlote following his wins. “It’s a real honour and I need to give kudos to the other excellent entries and the judges for their efforts.”

“I can still remember the cool morning when I got to go for a trip on the boat with the family, although I can’t remember much of the writing process—I wrote it relatively soon after I moved to Manitoulin Island and, funny enough, the awards ceremony took place two years less a day from when I started at The Expositor,” Mr. Schlote added.

“Great imagery and colour to set a mood with the ad and stand out from the page,” judge Karen Kavanagh, a professor in the advertising department of Algonquin College, wrote. “Well done on the text treatment of the contest on the top right and the use of chevrons to draw the eye down. Very nice balance to all areas—text block spacing, line leading and logos.”

“It’s an honour to be nominated and I’m so happy to make this newspaper proud,” Ms. Edwards said.

“Bravo to Warren and Kendra on the occasion of their awards,” said Alicia McCutcheon, Expositor publisher, editor and OCNA vice president. “Week after week the calibre of storytelling in the pages of these newspapers is phenomenal; we’re so fortunate to live in a place that is full of interesting people doing interesting things—it makes our job a lot of fun. Congratulations, Kendra and Warren, your accolades are much-deserved.”

Mr. Schlote nabbed another award earlier this spring, first for best in-depth feature or series from the Registered Nurses’ Association of Ontario for his five-part series on the Manitoulin-developed Canadian Indigenous Cognitive Assessment tool. 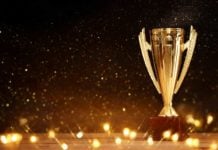