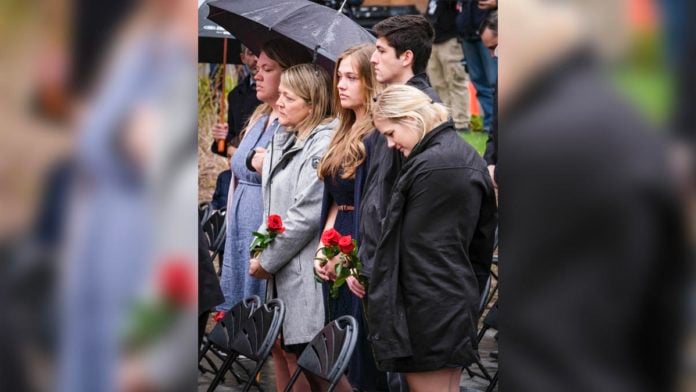 ﻿TORONTO—Hundreds of police officers from across the country gathered in Toronto on Sunday, May 1 to honour those officers who have fallen in the line of duty, ‘Heroes in Life, Not Death.’ This is the first such gathering for the last three years due to COVID-19, but police officers from the Ontario Provincial Police (OPP), Royal Canadian Mounted Police (RCMP) and corrections officers across the nation were out in full dress uniform to honour the 272 of their own named on the memorial despite a steady downpour. Those honoured Sunday included Manitoulin’s own Provincial Constable Marc Hovingh.

The entry parade to the memorial services was led by the RCMP, followed by the OPP and then other services as they gathered on Queen’s Park Crescent at the police memorial.

Ontario Lieutenant Governor Elizabeth Dowdeswell delivered remarks to the gathering on behalf of the Crown, noting that she had paid tribute last year at the memorial around this time, alone. “I could feel the absence of the people of Ontario,” she said. “It was on their behalf I made my visit.”

“How very grateful the people of this province were, and are, of the police officers in their communities,” she said. Ms. Dowdeswell cited the constables who died in the past as well as those who died more recently, including Constable Marc Hovingh, noting that they have been “a beacon of hope and support we so desperately needed” during the pandemic. “By serving and protecting us, no matter the context, in times of harmony and great challenge, police officers pay a crucial role in ensuring our individual and collective safety, security and resilience. These actions, indeed, should inspire us all to be heroes in our own lives.”

“This morning, Ontarians stand in solidarity with those who grieve and unite in healing,” she said, before offering police officers and those supporting them “a most sincere thanks on behalf of the province.”

Ontario Premier Doug Ford said that it was his “privilege to stand with those honouring the memory of those we have lost. I wish I could say that no more names would be added; sadly that is not the case,” noting that six new names were to be added this year. The premier added that their sacrifice was made in the name of keeping the people of this province safe from harm, never wavering regardless of personal risk. “The definition of true bravery.”

“On behalf of the people and the government of Ontario, we thank these fallen heroes for their service and their sacrifice,” he said. “To their families and loved ones, I want you to know that we are deeply sorry for your loss, we mourn beside you.”

The premier also thanked all of those who don a uniform each day and set out to serve their communities.

The All Nations Singers then performed an honour song for the fallen officers, before the Acts of Remembrance, a bugler playing the ‘Last Post,’ a moment of silence, a piper playing the ‘Lament,’ the firing of salutes, and, in the words of Mayor Tory “perhaps the most significant and important ‘Reveille,’ which is reserved for the day after, for the morning, for life.”

The emotional impact of the event showed through on the stoic faces of many of the serving police officers standing in honour as the Acts of Remembrance played out for their fallen comrades.

Father Jim Mockler then provided a benediction for those who gave their lives, “we ask you to be with us in the days to come and support all those who serve in policing, members sworn and civilian.”

The complete memorial service can be accessed at youtu.be/Uao8ntsZpYk. 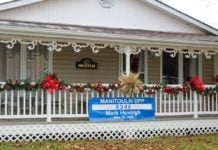