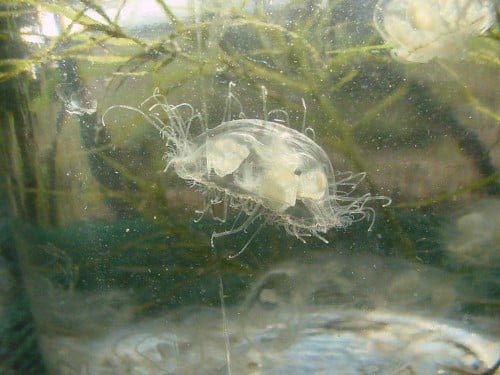 ONTARIO—While news reports late last month gave us yet another non-native species in our waterways to worry about, the freshwater jellyfish is apparently a rather worry-free strain to have in our lakes, the Ministry of Natural Resources (MNR) says.

According to Jeff Brinsmead, senior invasive species biologist with the MNR, the tiny jellyfish have actually been in Ontario since the early 1980s. There have been reports close to home of their sighting in Anderson Lake in 2004 and 2005, Moose Lake in 2011 and 2012 (both lakes just outside of Espanola) and in Georgian Bay with accounts coming in from the Parry Sound area. “They are in well over 100 lakes in Ontario,” the biologist said. “There is nothing on Manitoulin Island so far.”

Mr. Brinsmead explained that for most of its life, the freshwater jellyfish lives as a polyp, attached to aquatic vegetation, “but every once in a awhile, when the conditions are just right, they bloom out and form the medusa,” he said. Medusa is the term used for the non-polyp life stage of the jellyfish when they form the gelatinous, pulsating bell shaped top with trailing tentacles.

“They have tentacles with stinging barbs, which is how they eat,” Mr. Brinsmead explained. “They can be handled with bare hands, but some people have reported minor irritations after swimming through a swarm,” he added, likening the reaction to a mosquito bite, noting that some people have more of a reaction than others. “They are nothing to be afraid of.”

The polyps can live for several years, but only last up to one week in medusa form, growing, reproducing then dying and sightings of the medusa stage are often reported in August and September.

The freshwater jellyfish eat zooplankton and small fish, such as juveniles, the biologist noted. “There is always potential for some level of competition, but the affects on the ecology of the lakes are not documented and have not been deemed harmful so far.”

“The jellyfish are a non-native species, but are not considered invasive,” Mr. Brinsmead continued, giving the example of most types of corn being invasive to Canada, but not detrimental to the environment. “They’re not necessarily bad just because they’re not native.”

The jellyfish are native to the Yangtze River basin in China and are suspected to have arrived in North America by travelling in a ship’s ballast or hitching a ride on imported aquatic vegetation.