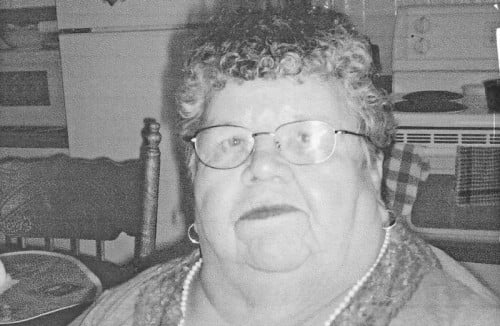 In loving memory of Georgina “Stella” Toulouse who passed away on September 23, 2012 at the age of 77. Predeceased by husband Henry Toulouse; predeceased by parents John and Marie. Dear sister of Albert (Hardy) Peltier (predeceased wife Sara); Zane (Diane), Jack, Glen, Violet and predeceased by siblings Mary, John, Clifford, Frank, Felix; sister-in-law of the late Joe Peter, Sarah, Jenie, Irene, Wilferd, Elizabeth, Lena, Victor, Tony (all predeceased). Survived by sister–in-law Evelyn Toulouse. Godmother to Glen Toulouse and Paygibe Wabano. Stella will be greatly missed by many nieces, nephews, cousins, natural helpers, and many close friends. Mia will definitely miss Stella. Stella showcased her talent in the many quilts that she made; she had many secrets…her baking recipes, attended many community events, especially the music shows. She shared the outdoors with her husband as they earned their living in the logging camps. She had a passion for the summer and fall harvest and shared some of her secret recipes. Visitation was from 6 pm on Monday, September 24, 2012 at Rabbit Island Centre until the Funeral Mass at 11 am on Wednesday, September 26, 2012. Burial at Wikwemikong Upper Cemetery. Arrangements entrusted with Island Funeral Home, Little Current.