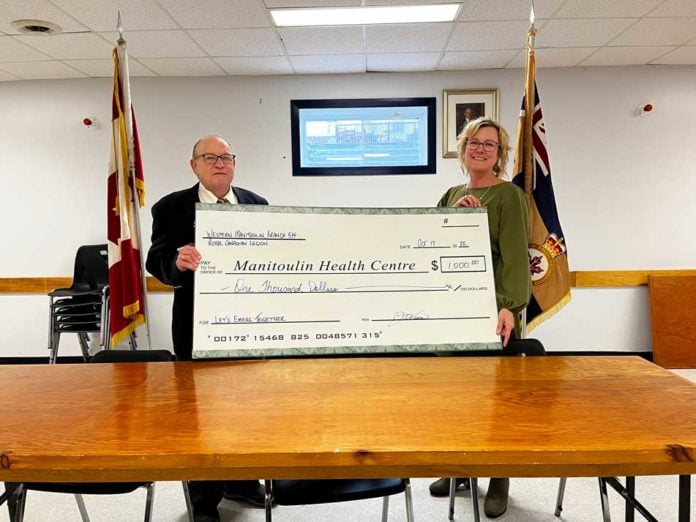 GORE BAY—Despite restrictions on usual fundraising activities, the Gore Bay branch of the Royal Canadian Legion was able to donate $1,000 to Manitoulin Health Centre (MHC)’s Let’s Emerg Together campaign. Legion Branch 514 President Jim Woods presented the donation to Paula Fields, president and CEO of MHC on October 18. He requested the funds be earmarked for the renovation and expansion of the Mindemoya Emergency Department. “The Royal Canadian Legion Branch 514 in Gore Bay, has continued to remain active behind the scenes, despite the restrictions of the pandemic,” Mr. Woods said. Branch 514 was able to raise funds through the sales of Nevada tickets. The branch also donated $1,000 to Health Sciences North in Sudbury. “I would like to take a moment to thank our membership for their continued support of the Royal Canadian Legion Branch 514,” he added. “Our community is so fortunate to have the level of health care facilities here on Manitoulin and it is so important we all contribute to its continued success.” When asked about the donation, Ms. Fields responded, “MHC is grateful to receive the continued support of the Let’s Emerg Together campaign. The renovation and expansion of the Mindemoya Emergency Department is ongoing, despite some supply chain issues. The donation on behalf of the Gore Bay Legion will help to ensure our community is better served. On behalf of myself and the board, thank you so much to the Gore Bay Legion and their members for considering MHC with this kind donation.” “It’s just something that needs to be supported,” Mr. Woods said. MHC is getting close to the end of their fundraising campaign for the emergency department but there’s still a need for new equipment, for example the chemotherapy unit, Ms. Fields said. 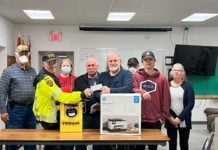 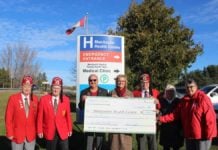