GORE BAY—Patients of Gore Bay Medical Centre (GBMC) will be surveyed as to their wants and needs for the building before a wish list for required renovations is drafted.

“Community input is important,” said Dr. Robert Hamilton at an ad hoc medical centre committee meeting last week. “From our (doctors and medical centre staff) point of view, what the community would like to see regarding office renovations is key. At the last meeting, we talked about what things were needed in a broader sense. In terms of community feedback on the building entrance, for example, the public may have questions on parking, etc. There is a lot of uncertainty on what the future medical service may look like but the basic structure of a medical centre clinic will be needed, so we want to know what the community would like.”

The building has served the community well since the 1980s but has become outdated. The future lifespan of the facility will be considered as well as ingress and egress, reconfiguration of the wait room space and bathroom, security and safety concerns, access to the dental suite, relocation of basement stairs and the loading dock required at the rear entrance.

Although a Facebook poll was suggested for obtaining public feedback at a previous meeting, a proposed survey was brought forward on Monday. The survey acknowledged the centre’s past service and offered three priorities: building entrance and exit, reconfiguration of waiting area and restroom or relocating access to the basement.

Dave Rogalsky, representing the Gore Bay Rotary Club, suggested the survey as presented was oversimplified. “There needs to be a preamble attached that better explains priorities one to three,” he suggested. “It needs to explain why changes are being made, why they are needed and why to prioritize one over the other.”

He pointed out the survey should be limited to users of GBMC. Burpee and Mills Township Councillor Wayne Bailey noted that goals must be well defined “or there could be a very wide scope (of answers and priorities). What is the comfort level when entering or leaving the building? Is there sufficient space for movement? Is there going to be a second level of questions?”

Whether the survey would be on Facebook, the town website, through SurveyMonkey or advertised in The Recorder was discussed. “We need different avenues to reach people,” said Gore Bay CAO Stasia Carr. She explained she could have the survey drafted and sent to committee members for feedback before it is published.

The GBMC was constructed in 1985. “The building has had a pretty good run,” Dr. Hamilton said. “We’ve been in practice for nearly 40 years and at 10,000 patient visits per year we’ve had over 400,000 over the years, which is remarkable.” He wasn’t sure if the clinic would be maintaining patient volume or if it would be higher or lower.

“Gore Bay is definitely the manager of the medical centre and we (Burpee and Mills) are one of the supporting municipalities. Grants would be a lot easier to access if three or four municipalities and First Nations communities are partners,” Mr. Bailey said. “The airport did that and they received a $4,000,000 grant.”

“The service clubs are still involved and make donations to the medical centre,” said Ms. Carr. “This new ad hoc committee has tried to ensure representation from every community on Western Manitoulin. Everyone uses the medical centre.”

Earlier in the meeting, Ms. Carr told the committee that the town does have $150,000 in donations on hand for the centre. “In terms of applying for funding, if there is $150,000 in the bank, this can be used as the local contribution for leveraging funding,” noted Mr. Addison.

Mr. Bailey agreed the funds would be useful and pointed out that at the first meeting, “we talked in terms of $200,000 for the renovations.”

“We won’t know until we receive more technical advice,” said Dr. Hamilton. Until architectural drawings are available, “we have no estimates on what construction costs would be. If someone says it will cost three million dollars for updates, we may say no thanks.”

Funding is available through the Green and Inclusive Community Buildings Program. It will provide 80 percent funding on retrofit programs up to $9,999,999 of total eligible project costs. Funding amounts for retrofit projects are $100,000 up to $3,000,000.

The town has initial schematic drawings but they would have to show the project is shovel-ready, said Ms. Carr. If all the West End municipalities supported the application it would help. She pointed out that under the funding program, the project would include some green retrofits such as changing lighting to sensors and would look at lowering the building’s carbon footprint. “We can upgrade to a whole new HVAC system, for example. The project funding available under this program totally falls within the scope of this project.”

Perry Patterson had volunteered to research architectural drawing providers and has reached out to medical centres on the North Shore and in Ottawa but has not yet heard back. “We need a list of what we are looking for in the survey,” he said. “The starting point is finding out what the general public has to say about what their needs are.” 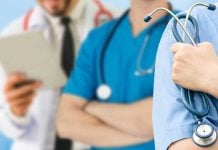 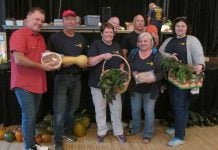