“We just have to get awareness out there among members of the public to slow down on our municipal roads; they are not highways,” stated Gordon/Barrie Island Reeve Lee Hayden to concerns that both local residents and tourists alike are speeding on several municipal roads.

At a meeting last week, it was pointed out that council is in receipt of a concern having been raised by a local resident of speeding taking place on Robertson Road.

“We have had a complaint about speeding on that (Robertson) Road and a number of other roads such as Emery Road where we have received complaints where drivers are not obeying the speed limits,” said Reeve Hayden. “Council agreed that the first thing we are going to do is make sure signage indicating speed limits are in place on these roads. But on Robertson Road, for instance, there are also children at play signs up. Lighthouse Road is another where speed signs are up, but people are oblivious to speed and warning signs already in place.”

“Somehow, we have to get people to slow down,” continued Reeve Hayden. “We are going to inquire about using the OPP digital speed sign on Robertson Road, and possibly rent our own speed sign as well for other roads. Those signs have been shown to work in other communities, and they just remind people that they need to slow down.”

Reeve Hayden said the issue of speeding on municipal roads, “is becoming more of an issue as time goes by. These roads are not highways, and these roads are significantly narrower than highway roads. And it is not just tourists, but local drivers that are speeding. And there are many young families on all of those roads.” He pointed out the municipality will likely also be asking for more police presence on Robertson Road.

Council passed a resolution that reads, “whereas council is in receipt of a concern with speeding on Robertson Road, be it resolved that the council for the municipality of Gordon/Barrie Island supports the clerk’s response and, if it is possible, will try to acquire the (Ontario Provincial Police) digital speed sign to use on that road also for a period of time, and to install a ‘slow, children playing’ sign at each approach to the area of concern. And further, to put Emery Road on the list of speeding problem areas and address this road in the same way.” 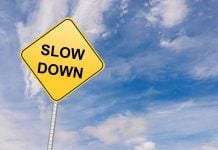