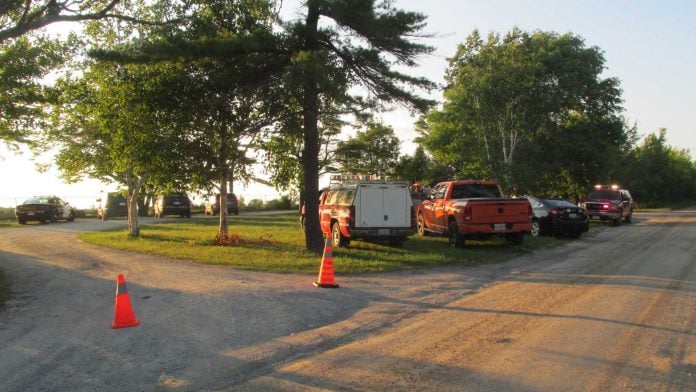 GORE BAY – A 17-year-old male from Gore Bay is lucky to have not sustained major injuries after he fell approximately 15 feet off the East Bluff lookout cliff adjacent to the Harold Noble Memorial Park in Gore Bay this past Friday evening. He was rescued by a team including the Joint Rescue Coordination Centre (JRCC Trenton) search and rescue technicians, members of the Manitoulin detachment of the Ontario Provincial Police (OPP), Sudbury-Manitoulin EMS paramedics and members of the Gore Bay Volunteer Fire Department.

Denine Locier said her son, Imagine Webb, had been at the park with his girlfriend when he got too close to the edge of the cliff. Miraculously, he did not suffer any major injuries, only a few minor scrapes and bruises, and was walking around the next day.

The OPP North East Region reported on August 1, “early this morning, with the assistance of JRCC and OPP (ERT [Emergency Response Team] members, a 17-year-old male who had been drinking was rescued after he fell off the ledge at the East Bluff scenic lookout in Gore Bay. The male was transported to hospital with non-life-threatening injuries.

Trenton JRCC reported in an online post Saturday: last night OPP North East Region requested assistance for a patient who fell off a cliff near Gore Bay. (Search and rescue) techs from 424 Squad responded with a CH-146 Griffon and CC-130H Hercules, rescued the patient and transferred him to a waiting ambulance.”

Constable Marie Ford, community services officer with the Manitoulin detachment of the OPP (which was the lead on the occurrence) told the Recorder, “an individual fell from the bluff and landed in a spot that is very difficult to access. The OPP called the JRCC and our ERT (as well as members of the Gore Bay Volunteer Fire Department) along with EMS paramedics with the Sudbury-Manitoulin District Services Board attended the scene to help.

“It was a very complicated rescue,” said Constable Ford.

OPP Constable Michelle Coulombe of the North East Region of the OPP told the Recorder that since the victim could not extricate himself from where he landed the OPP ERT members had to rappel from the helicopter to the subject. Another OPP officer had climbed from below (at the bottom of the bluffs) with the assistance of two firefighters.

“Once they were on the scene the officers assessed the victim’s injuries and fitted the victim on a seat harness and a helmet and affixed a line above to the helicopter to which the victim was lifted. The victim had been wrapped with blankets to prevent him from suffering hypothermia and officers liaised with JRCC captain,” Constable Coulombe said.

It took approximately three hours after the officers reached the victim that the Griffon and Hercules arrived, said Constable Coulombe. “We received the call at 6:20 pm and once the helicopter was on scene two search and rescue techs were rappelled to the scene. The subject was then secured and extricated by the rescue helicopter and turned over to the Manitoulin-Sudbury EMS ambulance paramedic staff who transported the victim to the Mindemoya Hospital.”

Lieutenant Sheila Tham of Gatewing Public Affairs told the Recorder the JRCC had been called by the OPP and the Hercules was used to provide illumination at the site of the incident for the helicopter. “I was following the rescue and I know two OPP officers rappelled down to assist the patient and once he was securely fitted into the seat harness he was hoisted up and taken to the spot where the ambulance was. Search and rescue technicians then lowered the victim onto a stretcher and he was put into an ambulance and transported to the hospital.”

Gore Bay’s fire department had been called in by the OPP to assist. Two firefighters, Jack Clark and Mike Addison, assisted an OPP officer (Robert Manley) in a climb from the waterfront at the bottom of the bluffs to the location where the victim was.

The fire department had been called to the scene at 6:26 pm on Friday and the police and paramedics were already on scene when they arrived, said Mr. Addison, who is the Gore Bay fire chief.