SHEGUIANDAH – A lot of things are happening in the digital universe of the internet these days as the world adjusts to the realities of fighting the global pandemic and communities strive to find ways to make isolation more bearable for their members.

Shelba Deer, program co-ordinator with Sheguiandah First Nation, cast about for innovative and interesting diversions with which to engage community—things that would help alleviate some of the pandemic isolation being felt in every community across the country. Always on the lookout, Ms. Deer said the idea of the graphic novel workshop came about through her own artistic interests as a young Anishinaabe-kwe.

Ms. Deer floated the concept during a staff meeting and her colleagues thought it was a great idea, she recalled. Then it was a matter of finding the right person for the gig. That is where Ms. Deer’s mentor through a seed program she had applied for hosted by Algoma University came into play.

“Sophie Edwards has been an amazing mentor to me,” said Ms. Deer. Ms. Edwards, one of the original founders of 4elements Living Arts, was assigned as a mentor through the seed program and the two conferred by conference call.

“It was her encouragement that got me to contact one of the graphic artists in a University of Manitoba webinar (Ms. Edwards) had researched for Indigenous writers and artists. So I emailed Neal and it all came together. As Sophie said, ‘it is like the universe is looking out for you’.”

His latest work, ‘The Krillian Key: Salamander Run’ is published by Kegedonce Press, and follows an immortal being, ‘Kyrill’ (a.k.a. Salamander), through the burning, charred remnants of Neo-New York, a dystopian landscape that plays a familiar backdrop common to graphic novels. Kyrill is the only key to a prison controlled by the seven gods of creation, and as such is chased through the post-apocalyptic hellscape depicted in ‘The Krillian Key’ by warring factions of alien/human hybrids—one of which seeks to shield Salamander from danger, while the other   would use him to open the prison doors.

Mr. Shannacappo is cited for his “imaginative world-building and vivid artwork.”

The graphic novelist took participants in the four-week workshop series through all aspects of a career as a graphic novelist. From initial concept to artwork, through publishing and essential tools, the workshop participants were encouraged to create their own artwork as they followed along.

Among his own inspirations, Mr. Shannacappo recalled writing a poem about “the man in black” that formed early genesis of one of his main characters. “It was very dark and had nothing to do with the graphic novel as it looks today, but that was when I first created the character of ‘The Father.’

It was several years before he found the look he wanted for that character. “Salamander showed up around that time,” he said. “He was also very different, but what both characters have retained is their tone—Salamander is light and The Father is dark.”

In conversation with The Expositor, Mr. Shannacappo noted that there has never been a better time for a young aspiring cartoonists or graphic novelists, writers of any genre, to make their way in the industry—but it will take work.

“Younger generations have a good grasp of social media,” he said. “You can publish your work online yourself, and there are all kinds of sites like Patreon, Instagram and others where you can market your work. I find younger people are much better at that than an older artist like myself.”

For an “older artist” Mr. Shannacappo demonstrated a pretty strong facility with the online graphics tools that are available to young artists these days, many of them with his favourite characteristic “free” going for them.

Mr. Shannacappo’s works can be found online at Chapters, Amazon and his publisher’s website kegedonce.com.

The Youth Comic Book Workshop was sponsored the Anishinabek Nation (Union of Ontario Indians) and the Ontario Indigenous Wellness Strategy. Expositor Staff - April 14, 2021
EDITOR’S NOTE: Manitoulin is being transformed with the influx of new residents and business owners who bring with them fresh ideas, experiences and perspectives... 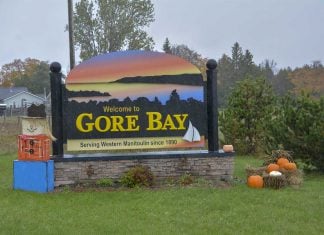 Tom Sasvari - April 16, 2021
GORE BAY - Gore Bay town council is upset after being turned down for funding from the Ontario Trillium Foundation for repairs to the...