HARBOUR ISLAND—The new owner of historic Harbour Island has now outlined his plans for the property and buildings he purchased earlier this year.

“We’ve outlined our plans on what we want to do with the property,” Rob Chandler told the Recorder last week. “Our goal is to set up a non-profit company that will lease the resort. The non-profit will have a two-fold purpose. The first will be focused on the restoration of the resort as a heritage property which will eventually operate as a sort of living museum where people can stay and enjoy life as it was in the 40s and 50s on Harbour Island.”

“The second, once the property is operating, will be to use it as a means to raise money for charity,” said Mr. Chandler. “Specifically, we would like to raise funds for the Shriners.”

“We hope to work closely with the Old Mill Museum (in Kagawong) in this venture and with any individual, group or organization that will support the restoration of the resort,” said Mr. Chandler.

Mr. Chandler explained, “both of my grandfathers and my wife’s father was a Mason and I am a Mason as well. I feel the Shriners are a good fit. I am hoping to work with Rick Nelson at the Old Mill Heritage Museum in Kagawong and see what we can do to restore and run as a heritage property, a living museum you might say.” He pointed out Sonny Woods, a Mason from Kentucky, has also stepped up to help assist in the restoration effort.

Harbour Island is a 30-acre Island that was once a playground for the rich and famous and was purchased by Mr. Chandler, a descendant of its original owner. He told the Recorder previously he wanted to get the property back into family ownership. His grandfather originally owned and built the resort on the Island and he grew up hearing stories from his parents and grandparents about Harbour Island. His grandfather had originally bought a single lot on the island in 1942 and the next year transferred the property to the Jake and Heinz Company. “My grandfather built the resort as a recreational retreat,” said Mr. Chandler.

His grandfather bought the island back from the company in 1946, subsequently selling it to the Hutchinson family in 1946. His grandparents stayed at the resort as caretakers on a year-round basis.

Mr. Chandler’s first priority is to make everything safe, the structures and resort, and clean up the property, especially of the poison ivy, so they can at least move around on the island.  He said for the near future he wouldn’t encourage anyone to visit the site in its current state, the property needs to have a major cleanup undertaken and the original cabins and resort are in disrepair and would  not be safe for anyone to visit.

He will be visiting the property with his family this summer and will begin the process of cleaning up the property. “My thought on it is if people want to be part of the restoration effort maybe they would want to pay become members, say $50 annually for the museum and restoration,” continued Mr. Chandler. “The whole idea is that we want people to be able to enjoy the property for generations to come.”

Harbour Island again up for sale 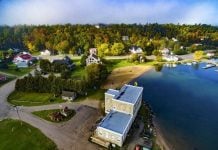 History Day in Kagawong will focus on shipwrecks of Georgian Bay, as well as a look at the history of Harbour Island