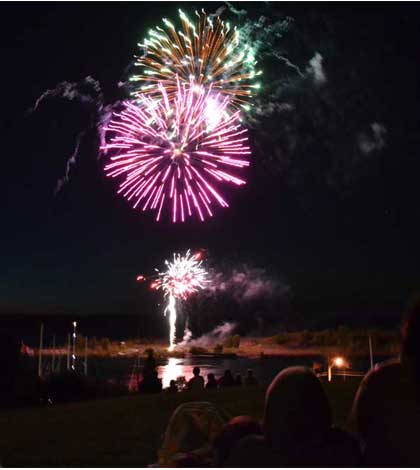 LITTLE CURRENT—The 46th Annual Haweater Weekend brought in thousands of Islanders and visitors to partake in a bevy of phenomenal celebrations.

The weekend, which is the Lions Club’s main fundraiser, had many popular events for individuals of all ages to enjoy and was an overwhelming success, according to club president Steve Nunn.

“Haweater Weekend went really well,” commented President Steve Nunn. “The volunteers, sponsors and supporters made the weekend one to remember. We are so happy with how it went and had just as much fun putting the weekend on as people did enjoying it.”

Low Island Park was the place to be Friday with pony rides, an air castle and the start of the mixed slo-pitch tournament.

At 6 pm, Zero Gravity’s The Ben Show brought huge numbers to the cenotaph, entertaining the crowd with his classic vaudevillian showmanship and incredible acts of balance and juggling, followed by the official Haweater Weekend opening ceremonies.

“Welcome all and congratulations to the Lions on hosting 46 years of events,” began Northeast Town Mayor Al MacNevin. “This is a great festival and this looks like it is going to be another good year.”

Algoma-Manitoulin MPP Mike Mantha was also on hand to extend his congratulations to the Lions.

“Next year will be my fifth year coming to Haweater Weekend and I know I wasn’t born here, but I hope that maybe I will be able to become an honourary Haweater,” joked Mr. Mantha.

“One thing the Northeast Town knows how to do is party,” added Algoma-Manitoulin-Kapuskasing MP Carol Hughes. “If you are visiting, cancel your other plans because you will probably want to stay for a while.”

Ms. Hughes also noted that NDP Leader of the Official Opposition Thomas Mulcair had “really loved it here” during his visit to Manitoulin last week, and “wants to come back soon.”

Lion Steve gave the last remark of the ceremony, welcoming the crowd and thanking the weekends many sponsors.

“Welcome family, friends and visitors,” the president began. “What started as a homecoming weekend in 1967 has really come a long way and turned into something none of us could have ever imaged. I would like to thank the sponsors, without which this weekend wouldn’t be possible and my fellow Lions who have worked all year for this weekend and without them, none of this would happen.”

The Anti-Depressants closed down the cenotaph Friday evening following the opening ceremonies, playing classic rock songs and guests danced the night away, as youth did at the MuchMusic teen dance at the recreation centre.

“The run went really well,” commented Nelson Wood, who organized the run with help from his two sons. “We had a great turn out of over 87 runners and great weather.”

The sixth annual co-ed soccer tournament took place throughout the day at Low Island Park with fun had by all.

Those wishing to get active had fun dancing and burned off calories from the many wonderful food vendors found throughout the weekend at the free Zumba class with instructor Casey Boisvert.

Magician and ventriloquist John Hopman performed Saturday morning at the cenotaph and throughout the weekend, keeping the audience entertained with a host of jokes, tricks, and a ventriloquist act.

The Quilts Over the Bridge quilt show was hosted by the Current Quilts and Stitchery Guild at the Northeast Town Recreation Centre all weekend. On Sunday, Jane Fletcher of Gore Bay’s quilt ‘Moose in the Wild’ was selected as the viewer’s choice.

“The real winner for the day was the local charities that will share in the proceeds from the car show and the Manitoulin Food Bank,” said organizer Roy Knobel.

Cindy Cook from TVO’s Polka Dot Door had children singing and dancing during her shows, with big smiles and laughs from the many little ones in attendance.

The 10th Annual Cardboard Boat Races was another popular event, bringing out its usual large crowd of spectators.

In the business division, RONA’s Rick Armstrong and Aaron Farquhar won back their long standing title after losing it to Hayden’s Meats last year. In the 8-11 division, Sydney Koehler and Lauren Goddard of Wave Runner came in first, while in the 12-15 Zabrina Cosby and Jordanna Dedman in Wanna Winner Waterbug won the first place title. In the 16 and over division, John Spanos and Jason Johanson placed first in HMCS Bottom Dweller. Special awards went to Slam Dunk’s Amanda Lawson and Rebecca Jacob for the best decorated boat and Community Living received the Titanic Award for the most spectacular sinking, winning a pair of lifejackets.

The beach vollyball courts were busy throughout Haweater Weekend with nine teams and 52 people competing. The finals saw Blackout Islanders beating out How to Set My Mother.

The Little Ray’s Reptiles of the World Show featured a tarantula, black rat snack, python, tortoise, gecko and a caiman. The show was both educational and entertaining, with children being given the opportunity to interact with the species after the show.

Zero Gravity’s Andrew Giordano used rings and unicycles to juggle and entertain, putting on several shows throughout the weekend.

It was a time to relax and refuel at the United Church Fish Dinner Saturday night where Barb Cranston and Norm Hore entertained prior to the first seating.

It was all elbows and tattoos at the roller derby later in the evening as the Greater Sudbury Roller Derby put on a demonstration, showing off the popular sport and looking for new recruits.

The Hawfest dance was as popular as ever with over 750 people in attendance.

The Legion also hosted a dance with live music from Double Barrel, which was also well attended.

On Sunday, downtown Water Street shut down for a street fair, beginning with an ecumenical service at the cenotaph.

There were lots of great vendors, from food to crafts, for people to take in and great snacks and games at the Firefighter’s Community Picnic as well.

Cowboys tipped their hats to the Horse Show and Western Gaming Jackpot Show at the horse ring while the Haweater parade made its way through town. This year’s parade winners were Charlie’s Angels, Traveling Tiki Hut and Redneck Yacht Club.

The euchre tournament in the Lions Den on Sunday was won by Beverly Hiltz and Dan Hawke. Nancy Milburn and Glen Gammie came in second, followed by Betty Gammie and Shirley Parkinson.

The children’s games and activities at Low Island Park Sunday afternoon, hosted by the Lions and the Children’s Aid Society, was a family affair, with both kids and parents taking part and having a lot of fun.

The winners of the slo-pitch tournament were the Nickel City Lions from Sudbury.

The street dance filled the far end of Water Street with youth and families who enjoyed the MuchMusic dance until the weekend concluded with a mammoth fireworks display. Spectators had a special treat during the show when a shooting star flew over Little Current, a fitting end to a great weekend.