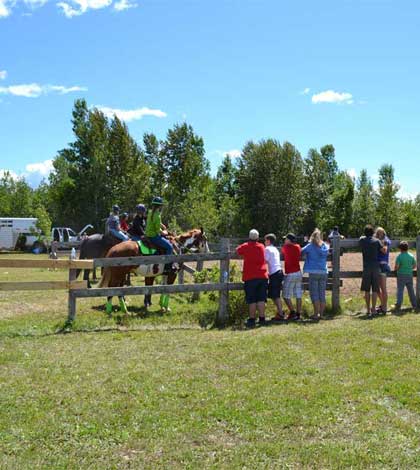 The 2013 festival season on Manitoulin has, as usual, enjoyed pleasant weather and once again our communities have been the beneficiaries of a great deal of hard work by a few dedicated individuals who have presented a tableau of powwows, homecoming events, celebrations of the swing bridge’s centennial, Haweater Weekend, theatrical endeavours at Burns Wharf Theatre in Manitowaning, Gore Bay Summer Theatre in the District Town and a variety of unique undertakings at the De-ba-jeh-mu-jig Creation Centre (also in Manitowaning).

We have enjoyed the RCMP’s Musical Ride in Gordon/Barrie Island not to mention the myriad of Canada Day activities that were hosted in nearly all of our communities as were the June 21 National Aboriginal Day events.

We have Manitoulin Countryfest to look forward to this weekend, then Providence Bay Fair, Manitowaning Fall Fair and Wikwemikong Fall Fair. Later on in September and early October, the Manitoulin Tourism Association’s “Taste of Manitoulin” event will find a new fall venue.

This year, as in other years, people have come together as tourist visitors and year ‘round Island residents to enjoy our communities in so many ways and to be able to do so in a free and unfettered fashion.

The sight of several same-gender couples walking hand-in-hand in Little Current this past weekend as they enjoyed the fun of Haweater Weekend stands in stark contrast to the heavy-handed anti-homosexual legislation on its way to becoming the law of the land in “modern” Russia.

How different for people in our own country who feel comfortable enough, even at a small-town event, to walk out together as same-gender couples and to enjoy the sights and sounds of community fun without fear of official government harassment and, possibly, even criminal charges.

What a contrast to the Russian situation.

Nearly 50 years ago, in 1967 when Pierre Trudeau was Justice Minister in Prime Minister Mike Pearson’s minority government, Mr. Trudeau struck down Canada’s existing anti-homosexual “morality” laws for consenting adults, famously declaring that “the state has no business in the bedrooms of the nation.”

Granted, this was a time of significant societal change, but Mr. Trudeau, Prime Minister Pearson and the Liberal caucus were in a minority government situation, a Liberal leadership contest was to follow shortly as Mr. Pearson had indicated that he would be stepping down as leader and there was a strong conservative current in the country.

But the government of the day moved ahead with these necessary changes and our country has been much the better for this action and the personal freedom (including same gender marriage, the right of gay couples to adopt children and to be eligible for and to recieve survivor’s benefits) that we now accept flowed directly from the Liberal initiative of 1967, including the sense of freedom that saw same-gender couples enjoying Haweater Weekend.

Meanwhile, in Russia, President Vladimir Putin has brought forward legislation that would make even this simple public display of affection illegal.

It’s difficult to imagine a modern, European country taking such a step backward and denying a substantial portion of its citizenry ordinary human and civil rights and thus also encouraging community harassment, bullying and gay-baiting as a guaranteed side-effect.

Since Western countries learned of the Russians’ plan, the idea of official retaliation has been often suggested, particularly by way of boycotting next year’s Winter Olympic Games in Sochi, Russia.

Such an action would certainly be a dramatic one and would lead to much debate.

Likely, however, this would be largely lost on President Putin who clearly is taking this action for the benefit of his domestic audience, playing to his gallery for his own political ends.

It would also deny many Olympic hopefuls the dream they’ve been aspiring to for their entire careers.

How much better it will be to communicate positive images to ordinary Russian citizens of an accepting and successful society, images that we increasingly see on Manitoulin Island.