The annual Island Co-Ed volleyball event was held on December 12 at Aundeck Omni Kaning’s Four Directions Complex gym. Schools combined their boys’ and girls’ teams into one or two co-ed squads that offers an interesting and unique elementary school dynamic! After a fun day of play the Central Manitoulin Eagle teams took the “A” and “B” titles this year!

What will 2022 be remembered for, sporting-wise? Will Canada’s World Junior Hockey team be known for winning the championship in August or one of the worst Boxing Day opening games, ever! After the game my Dad intoned, “I think they have been reading too many of their own press clippings.” I guess only 2023 will tell.

2022 was another difficult year thanks in large part to a COVID hangover, like the World Junior’s (hockey) in August! With any luck and caution, hopefully we will see the end of people not being able to freely assemble in hockey rinks, on soccer pitches, in Karate dojos and dance studios!

The following is a short (by no means exhaustive) retrospective on half a dozen local sports stars for the past year. I actually put in an AutoCorrect shortcut on my computer for Kasunich. So, whenever I start to type Maren’s surname with ‘Kas’ my old computer’s Word 2013 spits out Kasunich! Albeit, this has as much to say about my typing skills but with the sheer number of times I have written her name over the years I am sure I saved significant time!

2022 was no exception for Maren, who has been running at elite levels for many years. She now is a senior at Manitoulin Secondary and one of her many accomplishments was to be able to make it to the all-Ontario’s OFSAA Cross Country Championships this fall where she finished in 8th position despite a trip and fall in her race. Thanks to her skills and the strength of her teammates, her team was also able to go as well. Best of luck in 2023 Maren, I am sure university and college scholarship offers will be arriving.

Staying with the subject of running scholarships, Brodie Pennie’s name has to be on the desks of many post-secondary recruitment officers. Brodie has also been a running star over many years since his early elementary school day. Thanks to his strong showing this past cross country season as well, his dominant finishes from NSSAA and NOSSA earned him a trip to OFSAA as well where he finished 46th!
Still a junior, fellow Mustang runner Xavi Mara needs mentioning. Xavi has also worked extremely hard over the last number of years to be among the best in northern Ontario for sure but also in the whole province, evidenced by his 38th place finish.

Mustang cross country highlights would not be complete without mentioning their coach, Gerry Holliday! Gerry has been tireless as a coach for many years as a teacher but retirement only allowed him to devote more time to his gift.

Glancing back through 2022 columns, I could not help but seeing a couple of names repeated. Aundeck Omni Kaning’s Samuel Assinewai had a stellar year. He started the season with the Flint Firebirds of the OHL, then lighting up the NOJHL’s Sudbury Cubs. His presence was noticed by scouts for the Team Canada East as they were putting together their roster for the World Junior “A” Championships. Samuel and team made it to the gold medal game against the US, coming away with silver.

Delaney “Boog” Bridgeman has been a multi-sport maven for over a decade. Delaney has been focusing more on hockey for the last few years but she still made it to OFSAA for cross-country this fall! On the ice, she is a definite force of nature! Her off-ice training commitment has given her the strength and stamina to be able to be the consummate 200 foot (61m) player. Her hockey IQ allows her to see the ice so well that she can just as easily finish a play as she can set one up. Her desire and defensive skills added to her offensive touch gave her the invitation to captain of the Sudbury Lady Wolves!

A good sport is good for sports.
chipstoquips@gmail.com 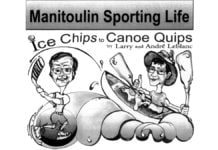 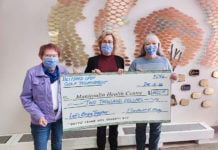