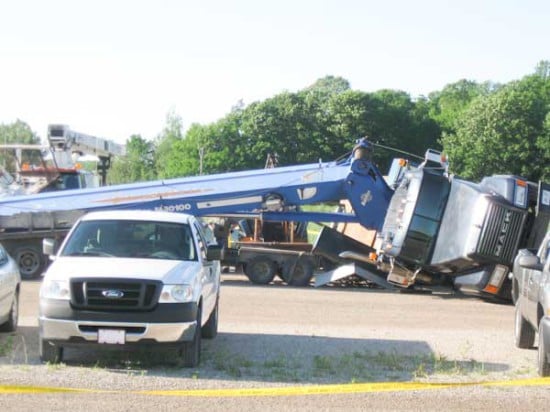 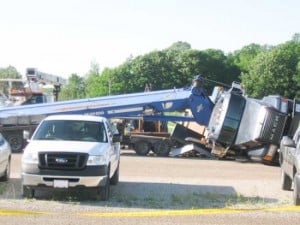 ICE LAKE—An Ice Lake business has been charged by the Ontario Ministry of Labour regarding an incident that took place last June in which the crane a man was working with at Dad’s Sales and Service tipped over and struck him. Wesley Gatchell of Massey was killed in the accident.

Matt Blajer of the Ministry of Labour told the Recorder in an email May 10, 2013, “on May 6, 2013, charges were laid against an individual carrying on business as Dad’s Sales and Service, under the Occupational Health and Safety Act, as an employer for failing to: count one, ensure that a lifting device be operated only by a competent person, contrary to s.51(2)(a)(i) of Ontario Regulation 851/90, at a workplace, contrary to s.25(1)(c) of the Act, R.S.O. 1990, c.0.1, as amended.”

The business has also been charged on count two, ensure that the provisions of s.46 of Ontario Regulation 851/90, were complied with, at a workplace, contrary to s.25(1)(c) of the Act, R.S.O. 1990, c.0.1, as amended; and count three, ensure that the equipment and protective devices provided by the employer were maintained in good condition, contrary to s.25(1)(b) of the Act, R.S.O. 1990,c.01., as amended, continued Mr. Blajer. He added, “The defendant failed to ensure that the PAT DS150 Load Moment Indicator of a Manotiex M30100 crane was properly functioning.”

As was reported in the June 29, 2012 edition of the Recorder, the Massey man died as a result of a fatal crane accident that took place at the business shortly before 3 pm on Thursday, June 21, 2012.

Workers had been picking up a utility trailer loaded with snowmobiles to put onto another trailer using a crane. When moving the load, the boom truck crane upset, striking Mr. Gatchell in the head.

Mr. Gatchell, a former Island resident, was at the West End business to pick up belongings from the sale of his house, located on the Poplar Road, his sister Sandra Berthelot explained at the time. Mr. Gatchell and the car lot’s proprietor Ron Campbell were friends she added, noting that Mr. Campbell had allowed her brother to keep his belongings on his property, which included a truck, camper and trailer, until he was able to pick them up, which he was doing that day. Mr. Gatchell had lived on Manitoulin for a year and a half before moving back to Massey and taking up residence on the family farm. He was in the salvage business, she said.

While the trailer was being loaded using the boom truck, Ms. Berthelot explained the boom truck crane upset, crashing down on her brother’s truck. Seeing the impending accident, Mr. Gatchell quickly pushed his girlfriend and another young man, who was helping with the move, out of the way. Tragically, Mr. Gatchell could not save himself. The ball from the crane struck him in the head, nearly decapitating him. The grandfather of four was killed instantly, she said.

“The first court appearance has been scheduled for June 27, 2013 at the Ontario Court of Justice in Gore Bay,” Mr. Blajer said in his email.