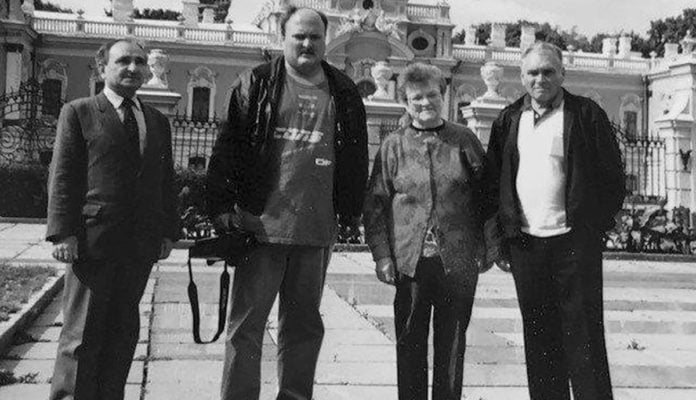 ‘If my dad was alive today, he would be horrified by the war and would have left to fight, even at an old age.’

MINDEMOYA—To say that Canadian-Ukrainian John Szewczyk of Mindemoya and his sisters are devastated by the war in Ukraine is an understatement. The siblings are constantly glued to the news channels from CTV and CBC to CNN and the BBC. The tears flow freely.

Until the passing of their parents, John, Luba, Roman (deceased) and Natalie, all their lives they have heard about the bloody 20th century battles for Ukraine. Their parents, Dmytro and  Yaroslawa Szewczyk, played a big part in that history and wanted to ensure that their children knew of the ramifications brought about by other countries on Ukraine.

It is easy to see that Mr. Szewczyk learned and understood Ukrainian history as words slip familiarly as he talked about his parents’ experience in their beloved country. Terms such as Holodomor, Bandera and UPA the insurgent Ukrainian Partisan Army.

Holodomor, meaning death by hunger, was a horrific experience in Ukraine in 1932 and 1933, resulting in the death of just under four million people. It was initiated by Russian autocrat Joseph Stalin who was determined to eliminate the desire of Ukrainians to have a free country, wanting nothing to do with Russia. With abandon, Mr. Stalin closed anything to do with the Ukrainians including schools, newspapers or any facility that promoted its culture. Arrests and executions included writers, artists, political party members and leaders of churches. He caused the widespread famine with collectivization (the replacement of small farms with state-run farms and the removal of all grain supplies).

Quotas were set for grain amounts for each village, and these quantities were sent to Russia. Failure to reach the impossible quotas led to Mr. Stalin doubling down on his efforts to crush Ukraine. Food and seed were removed from households and peasants who left in search of sustenance were brought back and imprisoned or executed.

In writing about the attempt to survive, a 1988 US Congressional report on Holodomor states, “they killed and ate pets and consumed flowers, leaves, tree bark and roots.” Instances of cannibalism were recorded in police records.

Mr. Szewczyk’s parents were youngsters at the time and managed to survive Holodomor, but they experienced dreadful times as adults just during World War Two.

Ukraine had created the Organization of Ukrainian Nationalists (OUN), which sought to form an independent state. The military wing was the Ukrainian Partisan Army (UPA) and it was this group that Dmytro Szewczyk embraced.

“When my dad reached the age of eight, he had to serve in the Russian army,” said Mr. Szewczyk. “When he found out about the UPA, he deserted as he wanted to fight for a free Ukrainian state. He joined the UPA and fought the Nazis and the Russians.”

“He was captured by the Germans and shipped by boxcar to Metz, France, to a German prisoner of war (POW) camp. There, German guards savagely beat him and broke his arm,” said Mr. Szewczyk. “My dad had to work in a field with POWs and forced-labour civilians for various countries on the Nazis’ side. One day, a man asked the prisoners if anyone spoke Ukrainian, and when my dad replied, the man said he would leave clothes and papers at the edge of the forest by the field. The next day, my dad found the clothes, and just by coincidence and luck, the air raid sounded. Everyone ran, and my dad ran with the forced-labour people.”

“He eventually met up with American soldiers, and he joined that army and brought supplies to the front,” explained Mr. Szewczyk. “When the war ended, he travelled to Belgium to work in a cement factory. It tourns out my mom’s father was the manager of the factory.”

“If my dad was alive today, he would be horrified by the war and would have left immediately to fight against Putin,” stated Mr. Szewczyk. “Even at an old age, he would have gone.”

The Germans chose John’s mother, Yaroslawa, when they came to her Ukrainian town, to work as a forced labourer in Germany. She worked in an ammunition factory until the Allies bombed it. After surviving the bombing, she was forced to work on a farm that supplied food for the German army. Forced labourers were allowed to go to church, but instead of going to church one day, Yuroslawa hopped on a train. She went to Belgium, where her father lived, and there met Dmytro. The couple were married and had Luba, their first child.

Luba (Szewczyk) Switzer lives on the north shore of Lake Mindemoya with her husband, Doug. “Snche ne vmerla Ukrayiny, ni lava ni volya, (which translates from Ukrainian as “Ukraine is not dead yet, nor its pride nor its will’),” she told The Expositor.  “These very powerful words have stayed with me my entire life, more so now than ever before.”

“My parents came to Canada as displaced persons in 1951,” explained Ms. Switzer. “My father came ahead of me and my mother to save up enough money to bring us over. They struggled for a while to survive with determination, their pride and their will. These sentiments have always been our constant and are our legacy. Ukrainians all over the world are praying for Ukraine. Our national anthem keeps us all together and gives us strength. I thank our parents for the legacy they left us. Slava, Ukraina (Glory to Ukraine).”

Natalie Szewczyk, who lives in Sudbury, sat down with The Expositor and expressed her feelings about the war on Ukraine. “Although I was born in Canada, I was very much immersed in my heritage, from going to Ukrainian school, dance classes and church to celebrating beautiful traditions, such as painting Pysanky (Easter) eggs to a traditional Christmas feast that all my friends were welcome to be part of.”

“Watching what is happening in Ukraine now is heart-wrenching and senseless,” said Ms. Szewczyk. “I feel such loss and sadness for all the torn apart and displaced families. I also realize where my family’s strength comes from and feel overwhelming pride in being Ukrainian. This war is horrible and a crime against humanity but I believe good will prevail, and there will be sunflowers again.”

Many Ukrainian women gathered around when they went to Yuroslawa’s former village. “Our blood is one hundred percent Ukrainian,” she told them. “But we couldn’t have picked a better country than Canada to raise our children and to give them opportunity and freedom.”

In 1992, the first year of independence for Ukraine, John Szewczyk took his parents to Ukraine. They were in Kyiv at the parliament buildings, snapping photos when John took a picture of two police officers. He was immediately told to stop. ”Why?” his mother asked. “You are free now.”

“Yes, said one of the police officers. “We are Ukrainians today. Tomorrow? Who knows?”