Hopes abound for a New Hockey League of recreational players

A few years ago I wrote how Island hockey was dying. I was going to “hang up the blades” but decided to try renting a Sunday time slot (7 pm in M’Chigeeng). I am very encouraged at the interest and support we have achieved. Over eight scrimmages, 45 different players, have laced up! The last scrimmage we had 22 skaters, two goalies and one referee. It is mostly young Island youth with a handful of older players and so far one girl, who is right up there with some impressive Island talent!

My concept is to form a low cost New Hockey League (NHL) of four teams for the start of the 2015-2016 season. A good recreation league can still be competitive and also fun, clean and respectful! For too many years this Island has had only tournament hockey with only a select number of players (10 or less) benefiting and the action is sometimes at the cost of good sportsmanship.

This letter is not to seek free advertisement but to maybe by chance find another person or two who has benefited from our great game and is looking to give back.

Yours truly,
John G. Corbiere
M’Chigeeng
(I can be reached through the Facebook group ‘Manitoulin Island Hockey’) 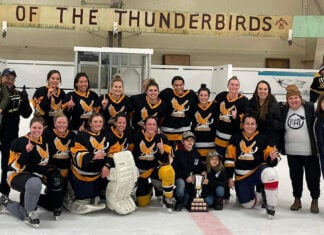