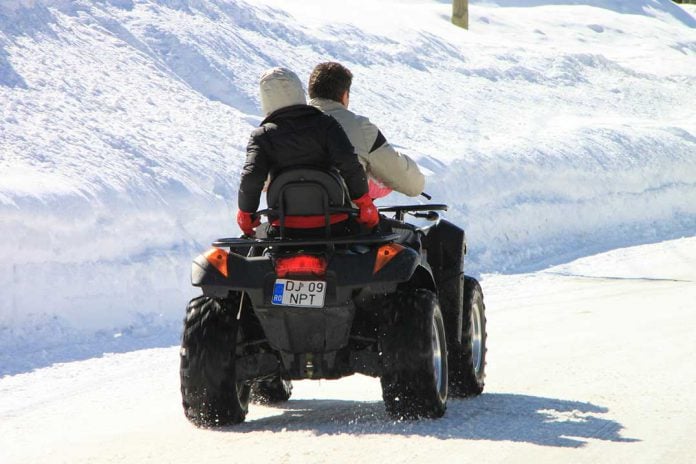 GORE BAY—Anyone operating an all-terrain vehicle (ATV) on a registered snowmobile trail can be charged under the Trespass to Property Act and fined and can face not only a fine, but a more severe penalty including a criminal record for the rest of their lives if they destroy a snowmobile trail surface.

“There is no using grooming snowmobile trails if they are being used and ruined by someone who is riding an ATV on them,” stated Brad Middleton, a member of the Manitoulin Snowdusters Snowmobile Club, at a club meeting last week.

Mr. Middleton explained, “we already have an example in the Espanola area last year where people were caught using wheeled vehicles on the snowmobile trails during the off season, having caused serious damage to the trail in wet swampy areas. Charges were laid under the Criminal Code.”

Doran McVey, president of the Snowdusters pointed out, “there are property issues in these cases. You can’t blame people who raise concerns when they allow their property to be used for a snowmobile trail and someone decides to drive their ATV all over someone’s property.”

Mr. Middleton explained, “the snowmobile trails are not like a paved road. Wheeled vehicles cut into the trail surface badly. This leaves lots of ruts which snowmobile riders have to contend with. Snowmobilers have paid valuable money for their trail permit. The ATV riders have paid nothing.”

“ATV riders who use the snowmobile trails are the equivalent of pirates just like the snowmobilers who use the trails without buying a trail permit. Essentially they are stealing a benefit, by not contributing financially to the system,” continued Mr. Middleton. “It costs many thousands of dollars each winter season to groom the trails with the large industrial machines we use. It is a waste of money to groom the trails if an ATV rider uses the trails and destroys the groomed surface.”

“The ATV riders can be charged under the Trespass to Property Act and given a fine,” said Mr. Middleton. “Under the new legislation, the fines for trespass have been substantially increased in the last couple of years. It is very important to note that the ATV riders who destroy the trail surface with the ruts from their wheeled vehicles can also be charged under Section 430(1) of the Criminal Code of Canada for Mischief to Property. This means the culprit could be subject to not only a fine, but a penalty much more severe. The ATV rider could end up with a criminal record for the rest of their life, which could affect their employment prospects or their ability to travel to another country. It’s not worth it.”