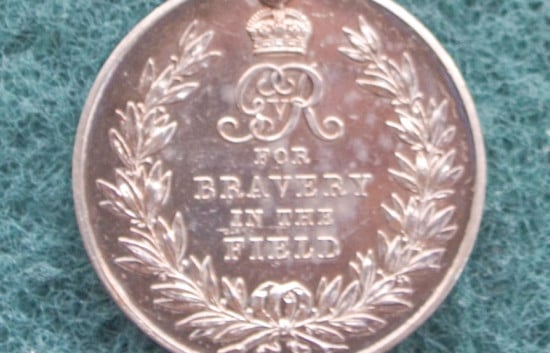 INDIANA—The community of South Baymouth has the chance to repatriate a piece of its history in the form of Military Medal for Bravery on the Field (MM) belonging to Private Henry Boyd Chisholm, but time is running out and the Little Schoolhouse and Museum needs your help.

The Expositor was contacted Sunday by Dave Thomson of the southwestern Ontario town of St. George who, through his hobby of watching eBay and other sites for war medals that come up for auction, often helps to reunite these important objects with family members or their home communities. Mr. Thomson has done this successfully 575 times, and he’s hoping to make it 576.

The Military Medal for Private Chisholm is currently listed on eBay with bidding to end tonight, Wednesday, October 17, at 6:45 pm. The medal is currently in Indiana, but with a little luck, will soon be back in South Baymouth.

Contacting the Little Schoolhouse and Museum, chair Jane Deyell was thrilled to hear the news of the medal and Mr. Thomson’s help, but she had one concern—money.

According to Mr. Thomson, Military Medals typically sell for between $800 and $1,200, but can go even higher. This is money the museum simply does not have.

“I can’t afford to do it,” Mr. Thomson admitted, “and the museum needs help doing it—they need help in the way of pledges.” His role is to bid, an admitted eBay “sniper,” throwing his figure in during the last four seconds of the auction. He urges Islanders to not bid against him, as this will only increase the price of the medal.

When asked if he was a savvy eBay bidder, he chuckled, “That’s the rumour.”

“In this case, I think I have a pretty good shot,” Mr. Thomson added.

While there are those who may be infuriated that a piece of history could simply be sold on auction, with little regard to its former owner or his family, Mr. Thomson asked that people think about it differently. “You have to appreciate collectors for keeping them out of the scrap heap,” he said, noting that these collectors do have a genuine interest in the people behind the medal, often looking up service records in government archives.

According to his research, Mr. Thomson said there are two other medals of Private Chisholm’s that are missing too: another WWI British war medal and a WWI Allied victory medal. He hopes that, with renewed interest in Private Chisholm, the whereabouts of these two medals will surface.

Private Henry Boyd Chisholm was born September 7, 1894 in South Baymouth, son of Alexander Chisholm and Henrietta Armstrong, and enlisted in the service in 1916 at the age of 22 in Providence Bay. According to his obituary, the soldier received injuries in WWI while serving in France with the Canadian Expeditionary Forces as an engineer. Enlisting with the 199th Battalion, he served overseas with the 110th Battalion and was awarded the Military Medal for bravery. He survived the conflict and returned to Canada following the Armistice.

To see a piece of Manitoulin history brought back to its rightful home, the Township of Tehkummah has agreed to take on the role of accepting telephone pledges to cover the cost of the eBay purchase. The medal, if all is successful, will be installed at the Little Schoolhouse and Museum, along with his information and photograph, which has already been placed there as part of a larger tribute to Tehkummah’s veterans, the result of efforts by Dick Bowerman of South Baymouth who collected photos and biographies of every Tehkummah citizen who served his country in times of conflict. Both Mr. Thomson and Ms. Deyell urge that time is of the essence if this medal is to be repatriated and hope Islanders open their wallets for the cause.