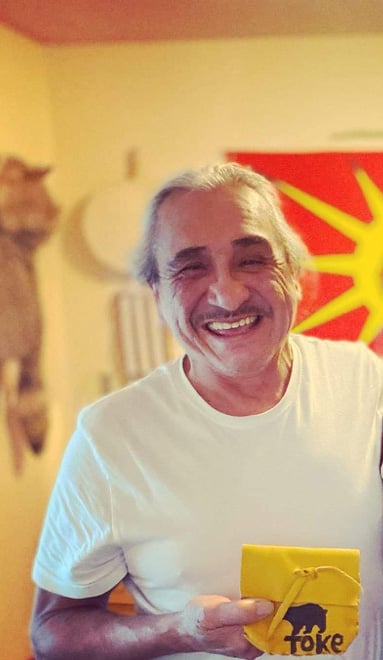 JOHN ADOLPHUS “TOKE” NOWQUAIKEZHIKGOQUAI COOPER
March 27, 1950 – July 29, 2020
In loving memory of John Adolphus “TOKE” Nowquaikezhikgoquai Cooper, Mukwa Dodem and spirit helper Miiangun, born in Kaboni, Wiikwemkoong on March 27, 1950 (sunrise), Adolphus died suddenly at Health Sciences North, Sudbury on July 29, 2020 (sunset). Survived by his wife Shirley Pitawanakwat. Loving son of Olivina Cooper (predeceased) and special son of Johnny Enosse (predeceased). Predeceased by beloved grandparents Mary Elizabeth Wabange-Eshkibag (M’Chigeeng) and John Wagosh (Kaboni). Loving son of Frank Nowquaikezhikgoquai (Cooper). Predeceased by beloved grandparents Elizabeth Douglas (Sheguiandah) and John Nowquaikezhikgoquai (Buzwah). Loving father of Daniel, Scott (Donna), Angela (Sebastian) and Sandra (Christopher), Nova Leigh, Francis and Ethan Cooper, Roseanne Shigwadja, Craig Lecuyer, and Natasha Cooper. Brother to Lloyd (predeceased) (Judy T./ Judy A.), Wilfred (Marjorie/Jennifer), Theresa (Henry), Joseph (Elsie), Loretta, Timothy (Elizabeth/Bernadette), Juanita, Roger (Rachel), and Rachel (Douglas); Valerie Enosse and Daphne (Micheal) Eshkawkgogan and Stewart (predeceased). Loving grandfather to Harley and Alicia Bebonang (M’Chigeeng), Brittany, Danielle, Seth and Serenity Manitowabi; Christopher Osawabine and Macy Manitowabi (Daniel), Nimkii Osawamick and Autumn Cooper (Scott) Jules, Malachi and Lily Shawanda and Sylvester Manitowabi (Angela) Kristen and Lance Gaiashk (Roseanne), Cassidy Shawana; Taylor and Grant Trudeau; Rowen and Freya Lecuyer; Alexei Pelletier (Craig), Grayson and Ella Rose Francis (Natasha/Nathan). He was blessed with six beautiful great-grandchildren. Will be dearly missed by his family, nieces, nephews, cousins, and friends. Adolphus was born in Kaboni and raised by his grandparents. He later went to high school in Espanola, Ontario. He worked as a Mill Worker in Chapleau, Ontario for most of his life. He also worked independently doing engine mechanics, small engine repairs, carpentry, wood working and carving. He was also a detailed artisan of traditional crafts. Adolphus was an outdoors man and lived honouring Shkagamik-Kwe. He was a survivalist and naturalist. He loved to be on the land whether it be trapping, hunting, harvesting, gardening or camping. In his final years, he spent much time at his camp and birthplace in Kaboni where he found his peace in fond memories spent with his family. Adolphus’ true gift was helping others using traditional healing and medicines. He instilled the traditional ways that he learned from his grandparents, and he was one of our community’s most fluent speakers. His first language was Anishinabemowin. Adolphus also had a gift in language. He spoke with eloquence when teaching the knowledge that was passed down to him. He was philosophical and an avid writer, he wrote down many of his thoughts and he was also a poet. He loved to meet people and had many friends over the years of his life, and he always made time to acknowledge those that he encountered. He never left without a goodbye, and he always ended a conversation in a good way. He loved all his family dearly, especially his children, grandchildren, and great-grandchildren. He gave himself freely and never left without telling them how much he loved them. Adolphus was strong-willed and had much pride in being Anishinaabe and he will always carry the O’gitchitaa spirit within him. Funeral Mass was at St. Anthony Daniel Parish, Kaboni Road, Wiikwemkoong on Friday, August 7, 2020 at 11 am. Immediate family gathered between 1-5 pm on Thursday, August 6, 2020 and relatives and friends gathered after 5 pm. Burial at the Wiikwemkoonsing Cemetery. Arrangements entrusted to the Jackson & Barnard Funeral Home.