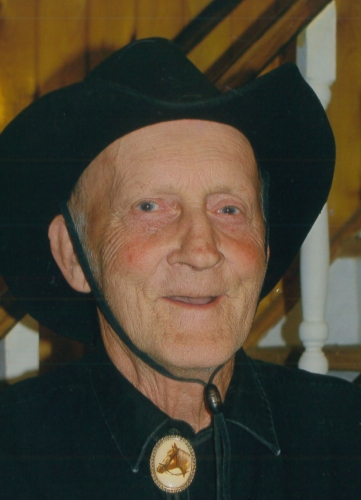 ROBERT JOSEPH BRUNO EADIE
“BOB, BOBBY, COWBOY BOB,
MANITOULIN’S WILLIE NELSON”
January 7, 1939 – August 6, 2020
In loving memory of Robert Joseph Bruno Eadie who passed away peacefully at home in Honora on the evening of August 6, 2020 with his family by his side at the age of 81. Beloved husband of Barbara Ann “Barb” (nee Burnett) Eadie. Loving father of his only daughter Amanda Eadie. Son of the late Robert (Bob) and Nina L. (nee Pipher) Eadie. Dearly missed by sister Doreen (William “Windy”)(predeceased) Taylor. Predeceased by siblings and siblings-in-law Clarence (infant brother) Eadie, Evelyn “Evey” (Karl Reinguette, Lawrence “Ken” Bailey and Lloyd Morrell) Bailey, Wilhelmine “Willie” (John) Smith and half siblings William “Puddins” Eadie, Ethel (William “Bill”) Alexander, Albert “Ab” (Verna nee Hallett) Eadie, John “Johnny” Eadie, Isabella “Izzy” (William “Bill”) La Frentz. Will be sadly missed by many nieces, nephews, friends and musicians. Bob was born in Green Bush where he was raised until moving to Honora in the 1950s. He loved fishing, hunting, farming, his dog Felix (predeceased), kitten Miss Kitty, the outdoors, wood working, old cars and spending time with friends. He retired early due to health conditions, however, that did not stop him from enjoying his music. He was known for his Country and Western, Gospel and Old Rock ‘n’ Roll singing throughout the Island and as far away as Massey. He helped create the Country 540 Band as well as belonging to many others. Bob could be found singing for the residents of the Gore Bay and Little Current nursing homes as well as at Community Living Manitoulin. You could find him playing and singing for birthdays, weddings, anniversaries, funerals and any other event he was also invited to. Even overbooking himself a few times. He was even asked to play at the Providence Bay Fair and MC and play at the Massey Fair. He was especially honoured when he was inducted as a member into the Wall of Fame in 2012 for his country music playing at the Little Current Radio Station. At Bob’s request there will be no services. In memory of Bob, donations can be made to the Manitoulin Centennial Manor, Royal Canadian Legion Branch 177 in Little Current or Manitoulin Health Centre Auxiliary. Please share your thoughts, memories and photos at IslandFuneralHome.ca.