TENNESSEE – Evansville shotput athlete Joseph Maxwell capped off his fantastic season with the University of Tennessee Volunteers track and field team this past week, receiving a second team All-America status at the 2019 NCAA Outdoor Championships, hosted by the University of Texas at Mike A. Myers Stadium.

Mr. Maxwell completed his redshirt sophomore season with a personal record throw of 19.50 metres to place ninth at the national meet.

“Yes, it was my personal best record,” Mr. Maxwell told the Recorder this past Saturday. “I went into the competition ranked 18th (in the nation) so I went in with the attitude that I really had nothing to lose. The top nine make it to the finals and it was on my third attempt (he set his personal record).”

He told the Recorder, “yes, the 19.50 mark does qualify me for the Canadian team for the World University Games.” However, he pointed out that he is pretty tired from the season of non-stop travelling and competition, and instead he is going to get work this summer in Greensboro, North Carolina.

Mr. Maxwell told the Recorder, “I have two more years at Tennessee.” When asked about his personal success this year he said, “my coach really stressed the importance of consistency in training, and because of this I was able to beat athletes with a lot better personal best records than I have.”

Second team All-America status in track and field is reserved for student athletes who finish ninth through 16th in their respective events at the national championships.

Joseph moved up to number three on the University of Tennessee’s top 10 list with his NCAA performance and, in addition, he became the eighth shot put All-American in Tennessee history. 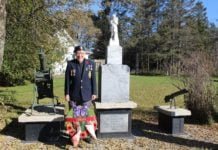