MANITOULIN—Julie McDermid has always loved dogs. When she was young, on every birthday she would ask for a pet dog. Unfortunately, her father had been bitten by a rabid dog while living in another country and, as rabies can be fatal, had undergone many vaccinations. As he was understandably afraid of dogs, Ms. McDermid’s dream of having a dog was not to be until she reached the age of 14.

Ms. McDermid and her father saw an ad for a puppy in the paper. The cost was $25 and Ms. McDermid did, as she said, “everything under the sun” to earn that money. The puppy was a black spaniel mix and his name was Barney.

As a teenager, Ms. McDermid worked at the Parker Pet Care kennels in Toronto. An old German shepherd was there that had been thrown out of a car. Ms. McDermid walked the shepherd she loved on weekends and then the owners told her she could have the dog. She named the dog Shawna and she even attended Ms. McDermid’s wedding. “I had her for six years,” Ms. McDermid said, “and she was my first real rescue dog.”

Ms. McDermid has fostered for Golden Rescue, a Canada-wide group based in Barrie that has rescued over 2,700 goldens in this country as well as from Turkey. Ms. McDermid also does house visits for rescues and if she gets a golden, she will get it to the Barrie group.

Ms. McDermid was one of the people instrumental in getting Manitoulin Pet Rescue off the ground. Pet services groups met, under the initiation of Holly Scott, to try to form an umbrella group. These individuals included Debby Colville of Pet Save Manitoulin, Colleen Caselton and Joan Wood of Fixing our Felines, Kathy Jewell from Kat’s Pet Supplies, canine control officer Paul Methner, Pat Wood from Island Animal Hospital and Ms. McDermid who took on the huge task of dog rescue.

“We came up with a name that was easy to remember,” said Ms. McDermid, “and then we applied for charitable status, firstly for accountability to the public which supports the organization and also to give receipts for people who donate to our rescue. And Holly volunteered to do our books.”

Manitoulin Pet Rescue has rescued 188 dogs to date and not all of them have strayed or been abandoned. Some of the animals are given to the group as an owner has died, moved into an assisted living facility that does not support animals or sold their homes to move into an apartment. At times, families cannot cope with behaviour issues with their dogs and must surrender them.

Ms. McDermid is especially thankful for the 12 foster families who, even though they may have jobs, are dedicated to ensuring that the dogs they are fostering have the crate and house training needed to ensure a smooth transition to their new home.

Manitoulin Pet Rescue ensures that the animals they put up for adoption are in excellent health. They receive two vaccinations, deworming and flea treatment and are neutered. A chip can be implanted if requested.

This organization relies solely on donations from the public. At present the volunteers are raising funds through the sale of Vesey’s bulbs, plants and seeds. Fifty percent of all funds raised go back to the rescue. Catalogues are available for perusal and to place orders at Kat’s Pet Supplies and the library in Mindemoya, Buie’s Store in Spring Bay, Manitoulin Transport in Gore Bay, Loco Beanz and The Expositor.

Ms. McDermid has lived for 37 years on Manitoulin and she and her husband Brad live in Spring Bay with their dogs and cats. Fittingly, as Ms. McDermid said, “Every dog we’ve owned has been a stray from the Island or the North Shore.” 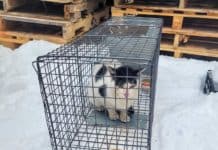