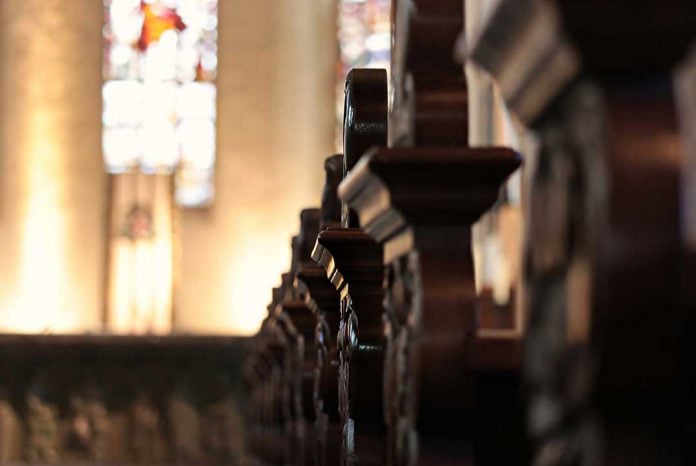 KAGAWONG—It is known as the ‘Sailors’ Church’ and it has quite a unique history. The congregation of St. John the Evangelist Anglican Church held a special service this past Sunday to commemorate the 80th anniversary of the church.

“We are celebrating today the 80th anniversary of this church, which is quite amazing,” stated Reverend Doug Prebble. “I can’t fathom what the Island looked like at that time, but it has been a gateway to the North.”

Dianne Fraser presented a historical look at St. John’s. “The Reverend Walter Jarvis was the priest whose vision and enthusiasm led to establishing the Anglican Church building in Kagawong. There had been an Anglican congregation in the area since early times having been mentioned in reports as early as 1892. The congregation held their service in the Community Church on top of the hill. Built in 1881 that church became St. Paul’s on the Hill United Church. The Anglicans were noted for their hearty responses and singing. They were served by missionaries from Gore Bay 12 miles away.

It is related that Father Jarvis, St. John’s first priest, sometimes walked to Kagawong for services until be obtained an old car, said Ms. Fraser. “He also gave the church its name—St. John the Evangelist—in honour of the saint and the Cowley Fathers under whom he trained,” said Ms. Fraser, noting the church has been served by 21 priests in its history.

“Being on the water’s edge, the church has used marine-related articles in its décor,” said Ms. Fraser. “These articles relating to boats have all been placed in the church since the 1950s.”

“Another unique feature of the history of St. John’s was the involvement by the passengers of the excursion boats like the Normac and the Norgoma, which plied the waters of the North Channel from early times until the late 1960s,” she continued. “The passengers from these boats would arrange their own services to be held in the church each time the boats stopped in Kagawong. Many people attended the services and the money they collected was left with the church. This helped out a lot. In addition to a new furnace, a loud-speaker that would broadcast music when the boats came in, was purchased.”

“In 1965, a boating tragedy involving the Huffman and Rhydwen families occurred in the North Channel off Maple Point. Our pulpit is a memorial to the four people, Shirley Huffman, her two daughters Katherine and Karen, and Wyn Rhydwen who lost their lives that August weekend,” explained Ms. Fraser.

In 1990, the interior of St. John’s was renovated and in 2003, the new entrance and parish hall was completed.

Ms. Fraser noted the church was dedicated on October 9, 1938 by Bishop Rocksborough Smith. The building stood one and a half stories in height and measured 30 feet long by 20 feet wide. From December 1936 until the dedication in October 1938, about 40 hardworking, enthusiastic members of the congregation labored long to bring the church building into being. The Women’s Auxiliary performed and sponsored many fundraising events such as euchre parties, suppers and bake sales.

“Father Jarvis drew up the actual plans and design to renovate the building while Tom Montague, Tom Prestage, the contractor and others carried out the renovation. The people of the congregation gave freely of their time and much of the material was donated,” said Ms. Fraser, who continued, outlining donations of items for the church that had been made by many local residents and visitors to Kagawong over the years.

Ms. Fraser explained, “many people visit this little church each year and one of the most prevalent comments from our visitors book is, ‘thank you for keeping your doors open’ and our congregation considers this a very important outreach.”

“The congregation of St. John’s is pleased to be able to celebrate 80 years—1938 to 2018—with all of you,” said Ms. Fraser. “We consider this community so very important and are pleased to be a part of it.”

Ms. Fraser then requested Charlene Chambers up to the front of the church for the latters’ formal presentation of the church banner.

“I was honoured to be asked by Dianne (Fraser) to create a banner to celebrate the 80th anniversary of St. John’s,” said Ms. Chambers. She explained, “the banner represents many of the symbols that Dianne has mentioned. The anchor like so many of the items in this church highlights the Marine theme. More importantly, the anchor as seen outside of the church is a symbol of hope. On the banner, I included those words ‘hope as an anchor’ which if you look is written on the outside sign,” as she outlined all the items depicted on the beautiful banner.

The banner “Is beautiful,” said Rev. Prebble, “and very symbolic in many ways. It is a reminder of who we are.”