M’CHIGEENG—Students in the Kenjgewin Teg Secondary School construction program stand back to admire their latest project, a gazebo for staff and students.

This is the second year that KTEI’s secondary school has offered a construction program, and the second large scale project they have tackled. Last year the students were asked to build a large privacy fence around the climate control equipment outside the school.

Andrew Moggy, the construction tech teacher at KTEI explains, “They had to plan it out, mark the post locations, sink posts, cement them in, and erect the fence. They learned a lot, earned credits, gained some experience to put on resumes, and KTEI got about 80 feet of quality fence at a great price out of the deal. This year the administration asked if a multi-function gazebo could be built, and our students met the challenge head on.”

Student input and planning was integral at all steps of the gazebo’s construction. The students drafted multiple designs, priced and ordered the materials, prepped the build site, dug the foundation, and hammered every nail until the very last shingle was in place.

“We’ve had a lot of compliments from staff members and visitors to KTEI, and staff input was taken into consideration during the design and construction of the gazebo,” explained Jessica Aguonie. “Our other teacher Amy Debassige thought that blue shingles (KTEI colour) would look nice and match the main building.”

Curtis Endanawas, another student, explained that benches and floor space were important so people could relax on their breaks, but also so the structure could serve other purposes.

The gazebo was finished November 10, and just in time, as the next day Kenjgewin Teg hosted a small Remembrance Day ceremony with singers and drummers performing from inside the gazebo. “I’m very proud of the work ethic and dedication our students showed when building this gazebo, and the rest of staff here at KTEI have been thoroughly impressed as well,” explained Mr. Moggy. “The only thing that gives me pause, is wondering what we’re going to have to do next year to top this project.”

Kenjgewin Teg Educational Institute is governed by a board of directors consisting of eight First Nation community representatives in the Manitoulin-North shore area and is centrally located in M’Chigeeng First Nation on Manitoulin Island – Mnidoo Mnising. In the Ojibwe language, ‘Kenjgewin Teg’ means “a place of knowledge.” For more information on programs at KTEI please visit www.ktei.net. 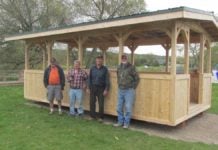