Kenjgewin Teg opens new campus at U of Sudbury property at Laurentian U.

“This agreement is a gesture of reconciliation by the University of Sudbury with Indigenous peoples,” said Kenjgewin Teg President Stephanie Roy. “It is a concrete, constructive and bold action that goes beyond symbolic gestures and words and recognizes the legitimacy of our communities to manage our education.”

Ms. Roy elaborated the Kenjgewin Teg reaction to the announcement in conversation with The Epxositor. “It’s exciting news!” she said. “We already have a plan in motion.” She noted that Kenjgewin Teg already has office and classroom space at the University of Sudbury’s campus in Sudbury.

“This has been in the planning stages for some time,” she said, noting that Kenjgewin Teg has been in discussions with the university since last March.

Ms. Roy added that this announcement was another step forward in a process that has been underway for over two years, as Kenjgewin Teg has been working toward its degree and certificate granting status. “It is a technical process that has been moving forward,” she said. “We are actually in the last stages of an organizational accreditation.” The Indigenous learning institute anticipates receiving a decision from the province on its administrative accreditation “within the next 60 days.”

Organizational accreditation, explained Ms. Roy, involves an audit that ensures Kenjgewin Teg meets all of the administrative and other criteria set down by the province in order to provide the underpinnings of a degree-granting institution.

Indigenous institutions, of which there are nine (including Kenjgewin Teg) recognized in legislation by the province, are unique among the colleges and universities in the province, said Ms. Roy.

University of Sudbury President and Vice-Chancellor, Dr. Serge Miville, noted the agreement reflects the university’s values of collaboration, partnership and commitment. “This is an historic gesture of reconciliation and empowerment, which respects the autonomy of Indigenous peoples,” said Dr. Miville. “That is why we are proud of our agreement with Kenjgewin Teg.”

In conversation with The Expositor the university president added that “we are really happy to be working with Kenjgewin Teg, this was an obvious choice for us.” He noted University of Sudbury has been talking with stakeholders in the region about how the university could ensure the legacy of its work with Indigenous communities could continue.

“It’s a question of principle,” he said, “returning custody of Indigenous knowledge to those to whom it belongs. It is time for an Indigenous institute to have autonomy so they can share that knowledge with the world.” To that end, the University of Sudbury is transferring intellectual property for correspondence and online courses to Kenjgewin Teg. “That will allow Kenjgewin Teg to make decisions on its own programs,” he said. “This will assist in jumpstarting that process.”

Dr. Miville committed to provide “whatever they need from us, we will do our best.” He reiterated that it was a simple question of principle that coincided with the ideals of empowerment that underlie the very foundations of empowerment. “Governance structures by, for and with the people to make their own decisions,” he said. “Not one institution dictating to them.”

He described the working relationship with the University of Sudbury as being one of “collaboration—an innovative way to go.” The new relationship will allow Indigenous knowledge keeping and promotion to reach its full potential. “An Indigenous lens is the correct perspective and we are now in 2021,” said Dr. Millville. “Kenjgewin Teg tell us they are ready to move forward.

Former University of Sudbury board member Tim Vine said, “I’m so pleased to see that the Indigenous Studies program at U of S is going to be continued by an Indigenous organization. When I was on the board I enthusiastically voted to have the program survive on a “by and for” Indigenous peoples basis. The former president, John Meehan, used long standing ties to Manitoulin to start developing this partnership with Kenj that has now come to fruition. Having this important program offered both here in Mnidoo Mnising and at the new Kenj campus at the U of S is such a benefit to our community. The recent National Day of Truth and Reconciliation reminds us how important these academic programs are for the reclamation and preservation of Indigenous culture, language and tradition, as well as sharing that knowledge with those of us who are comparative new comers.”

Ms. Roy praised the University of Sudbury move toward reconciliation as being “more than just words—taking concrete and meaningful actions.” The future for Indigenous-based learning is looking bright and this step could provide a template for other institutions moving forward in a spirit of true reconciliation.

Laurentian University, which is under a creditor protection process normally reserved for private companies and the first publicly-funded educational institution to implement that process, instituted a number of Indigenous studies courses when it unilaterally severed its ties to the federated colleges, of which University of Sudbury is one. Laurentian had not responded to requests for comment by press time. Ms. Roy was non-committal on whether Kenjgewin Teg was in discussions with Laurentian, simply noting that her organization was willing to engage in any opportunities that would restore an appropriate Indigenous perspective to Indigenous learning.

“Indigenous knowledge is tied to Indigenous places of learning,” she said. “Who better to validate our ways of knowing and being. We are coming full circle.” 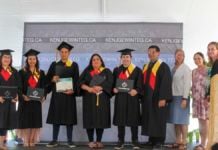