﻿MANITOULIN—Bleu Fisher and her partner Kimberly Beites were travelling from Mindemoya to M’Chigeeng recently when Ms. Beites spotted a distressing sight—a tiny kitten was lying the middle of the road, cars whizzing swiftly past its tiny, battered body.

“I got out and ran to collect the body thinking I would give it a decent burial,” recalled Ms. Fisher. “We have a little graveyard here.”

As Ms. Fisher ran toward the body, cars were sweeping past. “I could see its little head popping up as the cars were flying past,” said Ms. Fisher. “As I got closer, I suddenly realized that the poor thing wasn’t dead.”

Although there was a twoonie-sized spot of blood on its side, there were no serious injuries readily apparent, so the couple bundled the tiny creature up and took it home. “We put it in a little cubby and gave it some food and water,” she said, “but something wasn’t right. It was obviously in major shock.” The kitten began convulsing. “That is when we realized she was seriously injured.”

They called a veterinarian and took the kitten in to be examined.

An x-ray soon determined that the kitten had a broken leg above the knee. There was some consideration of amputating the limb, but the veterinarian did not think it was necessary. A further x-ray revealed another break and it was determined that amputation was the appropriate course of action.

“She made it through all that,” said Ms. Fisher. “She is here now with us, recovering.”

“People just don’t seem to realize how terrible it is to just drive on past an animal on the road,” said Ms. Fisher. “If Kim hadn’t spotted the kitten on the road it would have been smashed. She really saved the day for the kitten.”

The couple have christened the kitten Miracle Mika and she seems to be recovering nicely. “She isn’t feral at all and is about eight or 10 weeks old,” said Ms. Fisher, who has been led to a distressing realization.

“Someone threw that kitten out of the window of their car,” she said. “It landed on its hip and lay there in the road. If it had been hit by a car crossing the road it would have had different injuries, it would have been smashed.”

Donations have been pouring in to help defray the veterinarian costs, much of which has been covered by the couple themselves. “There’s about $400 left on the bill that was around $2,400.”

Ms. Fisher and Ms. Beites are active in helping to save local animals and are familiar figures in Island animal welfare, fronting a community spaying program supported, in part, by the Northeast Town.

Those interested in assisting the couple with their work can do so in two ways: they can either pay the veterinarian directly or e-transfer funds to bleufishh@gmail.com. 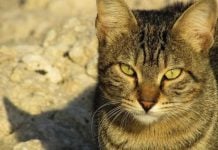