WHITEFISH FALLS—The 41st Annual Juried La Cloche Art Show opening reception and awards ceremony was held at the Whitefish Falls Community Centre on June 29 kicking off what La Cloche Artist Emeritus Ivan Wheale characterized as “the best show we have ever had.”

“I am really grateful to see so many people take an interest in this show,” said Featured Artist Peter Bering, “because there were so many volunteers who helped out. I couldn’t have done it (judging) without such good help.”

Mr. Bering pointed out that there were 233 works submitted for the show, with only 160-odd spaces available on the wall. “We had to choose those that would be rejected,” he said, “and believe me, there were some good pictures that had to be rejected. I want people to realize that just because you were rejected, don’t give up.”

For his part, Mr. Bering has 25 of his works on display during the show and attendees can purchase tickets on his ‘Gulls Feeding.’

Mr. Wheale noted in his remarks that the quality of the artwork being entered into the show has skyrocketed over the course of the past 41 years, placing a tremendous challenge on the jurors of the exhibition. He also admonished those artists whose work was not selected for this year’s show, or who did not place among the top three or receive honourable mentions, to not despair or give up.

“A big thank you to all volunteers, from the people who helped to accept the art, hang it and today with preparing the fire hall for tonight, preparing the food, arranging the flowers and bartending and every other chore that is needed to put this together. You are all appreciated.”

“It was not hard to pick the winner in the photography category,” said juror Peter Baumgarten. “Sarah (Furchrner) is that good. She is head and shoulders above me. (A tall order considering Mr. Baumgarten is an official ambassador for the Olympus camera company and an multi-award winning photographer in his own right). What was difficult was choosing which photographs would be in the running.”

The Best of Show Award went to Ruth Wallace for ‘As the Willow Creek Bends.’ The Peg Forbes Memorial Award went to Suzanne Lindsay for ‘In the Spirit of Seven.’

The Ivan Wheale Award was presented by the artist himself to Elizabeth Peekstok for ‘Between a Rock and a Hard Place.’

The Art Committee’s Choice Award was presented to Lionel Venne for ‘This Land That Speaks to Us.’

In the Elementary School Division Hailey Bourcier took first for ‘Into the Clouds,’ while Lilly Tilston took second with ‘The Abandon Ship’ and honourable mentions went to Cainan Correa for ‘The Farm’ and Caylee Little for ‘Autumn Sky.’

Getting into the La Cloche Art Show is an accomplishment in itself, so artists like Little Current’s Cliff Jewell who had multiple entries accepted were still left beaming. In fact, Mr. Jewell has had three entries accepted in the last four shows, starting with the first time he entered, and has himself served as an inspiration to others to enter—including Ruth Wallace, this year’s Best of Show winner.

The La Cloche Art Show will run from June 30 through to July 8, from 11 am to 5 pm daily and there is no admission fee. The raffle draw for featured artist Peter Bering’s ‘Gulls Feeding’ will be held at 5 pm on the show’s closing. 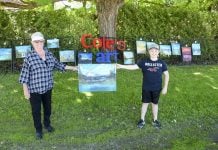 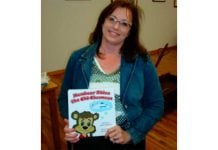 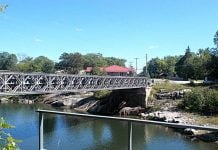 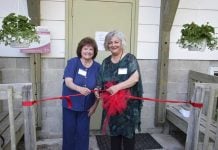