MANITOULIN – The Ontario Ministry of the Environment, Conservation and Parks (MOECP) does not track rainbow smelt in the North Channel for contaminants, a spokesperson told The Expositor, following reports that the province recommended not consuming rainbow smelts in the Goulais Bay area of Lake Superior due to contaminant levels.

“Rainbow smelt from the North Channel of Lake Huron have not been monitored for contaminants yet, and will be considered in future monitoring plans,” stated Gary Wheeler, MOECP spokesperson, in an email to this newspaper.

Much discussion has emerged in the past week about reported levels of contaminants in smelt from the Goulais Bay area of Lake Superior. While some reports have labelled this as mercury contamination, the true culprit is toxaphene, a pesticide banned in the US in 1990 and worldwide in 2001.

Toxaphene levels tend to be highest in Lake Superior among all Great Lakes, according to a 2000 report in the journal Chemosphere. This owes to its large size and massive depth, according to MOECP.

“Toxaphene is an extremely persistent insecticide in the aquatic environment,” the ministry told The Expositor. “Transported to the Great Lakes through the atmosphere, toxaphene enters the water through precipitation and dry deposition. The Great Lakes are a sink for toxaphene because of their large surface area and cold temperatures.”

The ministry noted that toxaphene levels have generally dropped in all Great Lakes since Canada restricted it from general use in 1974 and the United States also began to restrict it in 1982, eight years before the full ban.

That data informs the province’s recommendations in the Guide to Eating Ontario Sport Fish, a printed guide as well as an interactive online tool that offers a safe number of meals per month for a given species of fish in a given body of water.

The interactive guide is available at ontario.ca/fishguide.

Mr. Wheeler said Ontario tests more than 2,500 fishing locations across Ontario and makes maximum monthly meal allowance recommendations depending on the size and species of fish. These recommendations follow health protection guidelines from Health Canada and offer advisories both for the general population and sensitive demographics, such as women of child-bearing age and children. The maximum number of meals in clean fish is 32 per month.

Each water body will carry different test results, so Mr. Wheeler urged people to check the consumption tables before they dine on local-caught fish.

MOECP has tested smelt in the main portion of Lake Huron and portions of Georgian Bay and has advisories in four regions. The open water off the south shore of Manitoulin Island is one such tested region and the ministry states all people can consume up to 16 meals of rainbow smelt per month for fish between 15 and 25 centimetres (six to 10 inches) in length.

On the western side of the Bruce Peninsula, the general population can eat one smelt meal per month but sensitive individuals should not consume any.

The North Channel is split into three fish consumption advisory zones; smelt have never been assessed in those areas, said Mr. Wheeler. The Expositor inquired about whether Ontario would assess those waters in the future, particularly due to the popularity of North Channel streams for catching smelt on Manitoulin Island.

Earlier in April, the Township of Billings moved to shut down smelt fishing in the Kagawong River, echoing last year’s action to prevent crowds of people gathering in one place during the pandemic. Ordinarily, the river (and many others like it on the North Channel) draws scores of people from near and far to harvest the annual smelt run.

Billings Mayor Ian Anderson, retired from a career as a Ministry of Natural Resources and Forestry conservation officer, said the health risks of eating smelt are likely lower considering the fish only run for a very short time every year and people cannot regularly consume them, but said it would certainly merit further investigations to determine the extent of the issue.

“I’d agree that if it is a proven hazard (upstream) in Lake Superior, logically, you’d think that we’d certainly have at least a risk of something similar here,” Mayor Anderson said.

In the 1970s at the peak of the Island smelt run’s popularity, several hundred people would gather at the Kagawong River for the nightly harvest on weekend evenings. This has since dropped as more predator fish reduced smelt populations, but peak nights can still see more than 100 people netting in the river (when fishing the river is not banned due to pandemic restrictions).

Following The Expositor’s inquiry about the present absence of smelt testing in the North Channel, MOECP said it is working on a plan to collect smelt in the area this year.

“Decisions on where samples will be taken are made based on a number of considerations including whether there is a known source of pollution nearby, the lake is a popular angling area, the fish in a lake are a major food source for local inhabitants, the lake is being developed for recreation, the lake is part of an ongoing long-term monitoring program (e.g. sampling in Great Lakes) and the opportunity to collect fish samples through a partnership and available resources,” Mr. Wheeler stated.

The ministry decides what species to sample partly based on which ones local anglers target.

“If we are able to conduct the sampling and if sufficient numbers of fish are able to be collected to allow for analysis of the fish tissue, we will have advisories posted online for this area in 2022,” he said.

Long-term trends in fish monitoring have shown positive results, according to the MOECP spokesperson.

Mr. Wheeler said that over time, contaminants have been dropping in ministry-led studies of sport fish when assessing other major contaminants beyond toxaphene, such as mercury, dioxins and PCBs.

The Expositor made a public request Monday for smelt samples from North Channel streams. Samples of three smelt (fresh or frozen) can be dropped off at the newspaper office in Little Current from 9 am to 5 pm, Monday to Friday. This newspaper will send those samples to a lab for analysis to provide a snapshot of current smelt conditions.

That lab report should be considered as a starting point for further assessment rather than a scientifically valid report, as it will only involve a small number of samples that may not be generalizable to smelt populations as a whole. 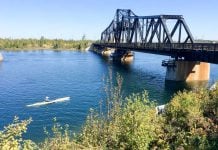