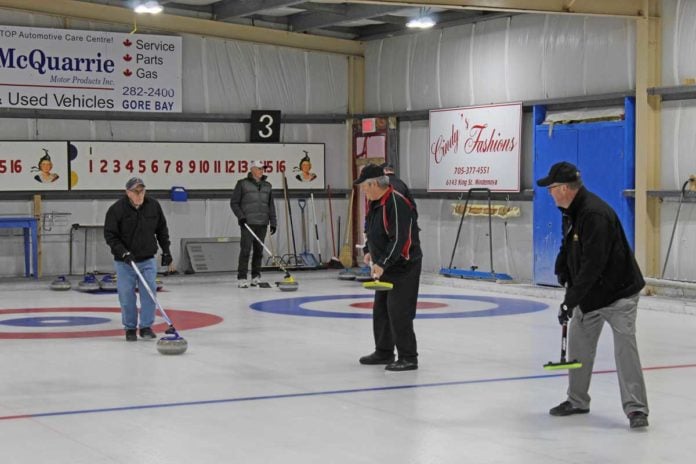 “I would like to thank all of you guys for coming out this weekend to participate,” said Dan Marois, president of the Gore Bay Curling Club at the conclusion of the two-day event. “It has been a couple of years since we have been able to hold this event, and I hope everyone enjoyed themselves.”

“The format was a little different this year, with the winners of each game receiving a cash prize,” said Mr. Marois. “The only team that won all their games this weekend was the Lew Lanktree rink.”

Mr. Marois noted as well that Mollyanne McLaughlin had donated beautiful E.F. Priddle mugs for the winning team in the finals.

“Thanks goes to Eric (Ruediger) and Randy (Skippen) for working on the ice and Elva (Carter) and her kitchen crew for feeding us so well,” said Mr. Marois. “We would also like to thank Max (Burt) for donating the roast beef for the dinner.”

“Hopefully next year, everyone will be back, and we will have even more teams take part,” added Mr. Marois.

There were a total of eight rinks that took part in the bonspiel, four rinks from Gore Bay and one each from the Little Current, Mindemoya, Providence Bay and Manitowaning curling clubs. Every rink played three games with the finalists playing an additional game.