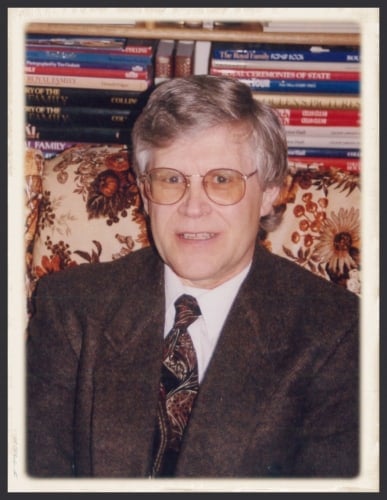 LORD ALEXANDER ABRAHAM MUSQUETIER
May 24, 1941 – February 1, 2021
Lord Alex Musquetier, 79 years of age, passed away peacefully on Monday, February 1, 2021, at the Mindemoya Hospital. Alex was born May 24, 1941, in Amsterdam, the Netherlands, to the late Abraham and Gerda Musquetier.
In his early twenties, while on vacation in Canada, he met Brenda Stenning (predeceased), and they married on June 24, 1967. Alex went on to get his degree in teaching and taught in several northern communities, including Birch Island. Alex and Brenda eventually settled with their two children in Little Current on Manitoulin Island. Alex and Brenda were active members in the St. Bernard’s Catholic Church Parish and were proud to be part of the building committee for the new church. Known lovingly as Nana and Opa, they moved to Providence Bay in 2001 to be closer to their grandchildren. Through the years, Alex enjoyed corresponding with many Royal Families in Europe and gathered an extensive collection of letters, pictures and Royal memorabilia. Alex is survived by his brother Edwin (Jolanda) and will be deeply missed and lovingly remembered always by his children Irene (Darren) and Charles (Amanda), his cherished grandchildren Grace (Edward), Abigail (Joel), Benjamin, Lauren and Nathan. He will also be greatly missed by Duchess, his cat and special family friend, Jessica. Family gathered for a private service on Saturday, February 6, 2021 at 12 pm
at Island Funeral Home. Burial in the spring.
Your purpose on this earth is firstly to take care of others, especially the needy.
~Alexander’s Philosophy