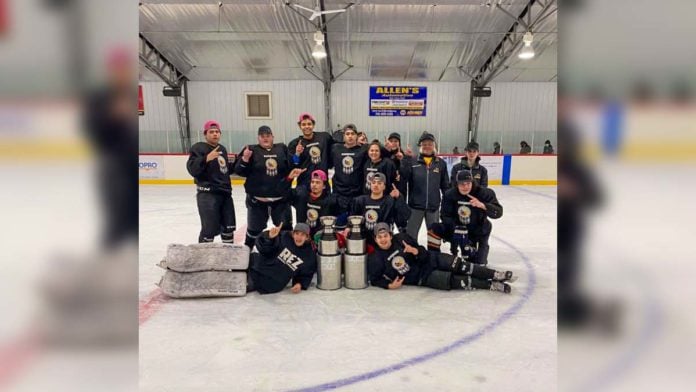 MANITOWANING—Dismayed that the Little Native Hockey League (Little NHL) tournament was cancelled once again this year due to the pandemic, Gerard Baibomcowai decided to take matters into his own hands on behalf of the youth who would be missing out on one of the most popular events of a normal year’s social calendar. Little NHL has grown from a small Manitoulin area tournament for Indigenous youth held in Little Current into a massive event featuring hundreds of teams from across the province and beyond that can only be hosted in a major urban centre.

“This will be the third year in a row that Little NHL has been cancelled,” said Mr. Baibomcowai, “so I’m doing a midget tourney.” The tournament, aptley named the Lost LNHL tournament, was held at the Assiginack arena. The rules of the tournament were pretty straightforward. “Team members have to be status, be 15 to 17 years old, plus we are including players that couldn’t finish off their last Little NHL year, so players 18 to 20 are also allowed to play.”

The five teams, constructed by a spin-the-wheel selection, had a three-game guarantee.

Keeping to a level rink was a bit of a challenge, noted Mr. Baibomcowai. “People were trying to enter their own teams but I said “no, I work for Little NHL and I’ve seen teams that didn’t have a chance, so I’m trying to make it as fair as possible. I didn’t want people entering teams with just 20 year olds or AAA players.”

The tournament was also co-ed, so the makeup of each team was planned to be five goalies, two of which are female, 15 women and 45 males.  “That’s one goalie, three girls and nine guys per team,” explained Mr. Baibomcowai.

“In the end it doesn’t matter who won or lost,” said Mr. Baibomcowai. “All that matters is the youth finally got to play some hockey and made new friends by playing with teammates they would never have played with before.” The teams were created at random using the spin of a wheel.

“Wasse Naabin Youth Centre supplied all the game prizes, including star sticks for games one through nine, second and third stars received hats or toques and in the championship game the top three starts all got sticks,” said Mr. Baibomcowai.

“The youth really enjoyed it,” he said. “All asked me if we could run it again next year, but I am thinking Little NHL might be back. If it happens to be cancelled again, we will do this at the same time next year. If not, I am thinking maybe we will run it during Family Day Weekend.

Raising funds for the event took a bit of doing he admitted, but Mr. Baibomcowai was able to secure a lottery licence at the 11th hour. 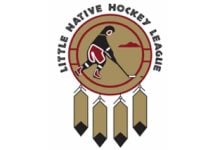