﻿LITTLE CURRENT—It was a bittersweet moment for Manitoulin Legal Clinic board, staff, members and clients as long-time executive director Michael Shain was honoured with a retirement dinner held at the Anchor Inn in Little Current on Thursday, August 25.

Mr. Shain was lightly roasted by friends and colleagues, some of whom had travelled from southern Ontario for the occasion. Along with a plethora of liquid gifts, Mr. Shain was presented with an East Coast blanket and a custom dark walnut wooden plaque emblazoned with a blue silhouette of Manitoulin Island and ‘Shain’s Hide-a-way’ created by Little Current’s We Have the Wood.

Mr. Shain was lauded for his hard work and dedication to his clients by Manitoulin Legal Clinic chair Linda Erskine and for his leadership by community legal worker Susan Mullen.

Among the recurring themes expounded during the speeches by friends and colleagues during the dinner honouring Mr. Shain and his work during his 32-year career was the empathy he displayed towards his clients.

“Empathy is not a word often associated with lawyers,” laughed fellow lawyer Graham Webb during his keynote speech. “But it is a vital requisite for someone practicing ‘poverty law.’” His colleagues, clients and friends’ commentary on his life’s work emphasized those qualities as practiced by Mr. Shain each and every day.

“Mike is a straight shooter,” said friend Jim Ironside. “He never talks down to anyone but speaks plain and in language that people can understand.”

His qualities led one wag in the audience to quip “are you sure you are a really a lawyer?”

His friend from university days, Alan Wiess, has always enjoyed poking Mr. Shain’s balloon when it comes to his career and his gift was one of the most hilarious of the evening. Having compiled a collection of sordid tales of the misdeeds of lawyers in private practice into a boxed set compendium entitled ‘The Book of Shysters’ along with a ‘Supplement: The International Crookbook.’

But as his clients readily attest, Mr. Shain is indeed a lawyer, and a very good one at that.

“We haven’t always won,” admitted Mr. Shain ,referencing the many thousands of cases he has represented in his career, “but it has not been without trying.”

Mr. Shain is somewhat unique in his career history, at least for a poverty lawyer, in that he was originally a Crown prosecutor specializing in drug offenses. Many of the stories related by his colleagues from those years centred on that portion of his career—and the stories he witnessed during that phase of his career played a key role in his decision to join the Legal Aid Ontario community.

Much of Mr. Shain’s practice in recent years has been in representations on behalf of injured workers, a difficult and nuanced field. Workplace Safety and Insurance Board (WSIB) is a field that can be very lucrative for private legal professionals, but Mr. Shain took on that role on behalf of those who could not afford those avenues. While the thickness of legal briefs are often measured in inches, they can easily approach a depth of feet in the WSIB arena.

Long-time Manitoulin North Shore Injured Worker’s Group president Colin Pick travelled from his home outside Sudbury to be at the dinner to honour Mr. Shain, and Mr. Pick delivered an impassioned and emotional speech thanking Mr. Shain for his efforts in both assisting in founding that organization and for his ongoing support of their issues over the years.

“Mike’s work on behalf of injured workers has been of great importance and cannot be overstated,” said Mr. Pick. “He is going to be missed.”

Mr. Shain was slated to retire last year but agreed to stay on for an additional year in order to accommodate the needs of his successor, who will be taking over the reins in the first weeks of September.

“I still have a little bit of work to finish up,” said Mr. Shain.

His is a dedication on display right up to the very last minute. 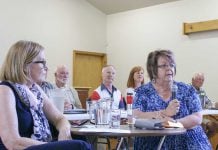 School board trustee candidates passionate about education for Island youth 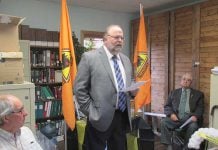