MANITOULIN—Monarch butterflies are a common sight on Manitoulin Island in the summer, but they don’t spend the winter here. At the end of every summer each little butterfly spends weeks flying across North America, migrating to a single wintering region in the mountains of central Mexico.

For the past few weeks, the Species at Risk (SAR) program of the Wiikwemkoong Department of Lands and Natural Resources has been collecting data about the annual monarch migration on Manitoulin Island. The public was asked to report sightings of any monarchs seen after August 17 by email with the date, time, location, and number of monarchs seen. With cooler weather and hard frost, the migration is now mostly finished, and the results of this summer’s study have been tallied.

In 2022 almost everyone noted they saw many fewer monarchs than last year. In 2021, by contrast, monarchs were so abundant in some places that it was hard not to hit them while driving. However, this year they were noticeably absent in many areas. Monarch populations naturally fluctuate from year to year due to weather and climate conditions, so it is hard to know whether the reduction in numbers is due to natural environmental factors or due to human-caused problems.

The response from the public was very enthusiastic in 2022. The SAR program received 111 reports from 29 observers across Manitoulin Island from Wikwemkoong to Silver Water. Dates of sightings ranged from August 14 to September 19. Most observations were just a single butterfly, with some sightings of 3-5. The largest numbers seen in one day were reported at South Baymouth and at Lorne Lake south of Evansville. South Baymouth is a well-known migration “funnel” (a place through which many monarchs pass). Large numbers of monarchs are seen there every year during migration.

Peak dates for the highest number of reports and the most monarchs seen included Saturday, August 20, Sunday August 21, Monday August 29 for eastern Manitoulin, and Thursday, September 1 for Western Manitoulin and South Baymouth. The greater number of sightings may mean that more monarchs are moving through, or since some of these are weekend dates it could also be that on those dates people were not at work and were able to be out looking at things.

In 2021, migration appeared to be done on the eastern part of Manitoulin by around September 3, but then a second wave of migrants came through after the 7th and into the teens, with especially large numbers seen on Western Manitoulin (Elizabeth Bay, Dominion Bay, Walkhouse Bay, Providence Bay, etc.). In 2022, we watched for this phenomenon to see if it occurred again, but with fewer monarchs overall, it was hard to tell whether there was a second surge. We speculate that the different surges may represent Monarchs coming from separate locations to the north of Manitoulin Island, but so far this is not proven.

In both years it is apparent that the long points of land that extend out into Lake Huron are high-traffic funnels for migrants. We’ve had excellent reporting from landowners on some of the major points describing (2021), “hundreds moving through” and even “an embarrassment of monarchs.” As well, many sightings have come from other places along the south shore where it is clear that lots of monarchs stop to feed or rest before the water crossing. The 2022 reports continue to show these areas are important for monarchs, even though there were fewer butterflies seen.

The Government of Canada expects to legally list the monarch as a Canadian endangered species sometime this winter. North American populations of monarchs were greatly reduced between the mid-1990s and 2015 in part due to the increased use of herbicide-tolerant crops which lead to more herbicide use and a loss of milkweed, which is the only food plant for Monarch caterpillars.

As well, in Mexico severe winter storms and illegal logging wiped out habitats and butterflies for several years running. Other problems include new research that appears to show raising monarchs in captivity may interfere with their ability to orient themselves for migration. In addition, exotic species of milkweed planted as ornamentals (such as tropical milkweed, Asclepias curassavica, available for sale in Ontario) attract egg-laying female monarchs but the caterpillars do not grow well when eating this plant.

Despite all this, the biggest threats to the monarchs occur mainly outside Canada, and there are very few threats here on Manitoulin Island. Therefore, this is a good place to study monarchs and to help them if possible.

Point Pelee and Long Point are well known southern Ontario locations for observing migrant Monarchs as well as migrating birds. Manitoulin Island is still little known as a migration point, but clearly we are an important place where monarchs can rest and fuel up on flower nectar before flying across the big lake. Wiikwemkoong’ SAR program thanks everyone for participating in the study of monarchs. It’s not too late to send in your data from this season if you haven’t already. Please submit any sightings with date, time, and location to manitoulinmonarchs@yahoo.com. 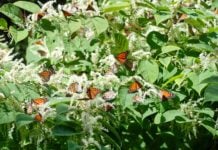 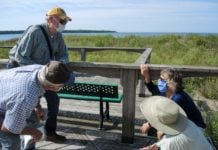 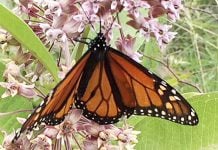