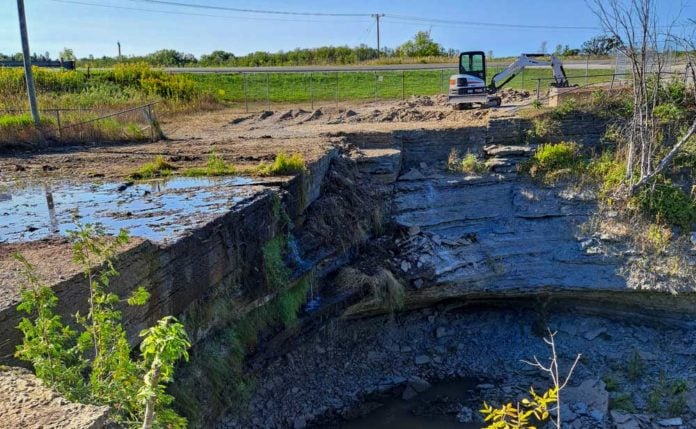 ASSIGINACK—Assiginack Mayor Dave Ham says once work is complete on a new pedestrian bridge at High Falls, everything will be put back where it should be, acknowledging that with construction work taking place the site does not look attractive. Meanwhile, an Assiginack couple is raising concerns with the project, the damage it has caused to the area of the falls, and the disruption it has caused for turtles and other wildlife in the construction area.

“Everything is under construction right now,” said Mayor Ham, recently. “The reason it all looks upset is that the concrete abutments have been installed right into the stone and are curing right now. The construction company had to put rerod going into the bedrock. I was out there and I noticed that the contractor has much of the rock torn up on each side of the river bed. I realize right now it doesn’t look pleasant but once the work is complete everything will be back in place and it will look as attractive as it did before.”

Mayor Ham noted as part of the project, “there will be new fencing and other features put in to be provided for safety purposes.”

The project includes the construction of a pedestrian bridge to cross the top of the falls that will link both sides of the township property. It was funded by a grant from the Ontario Trillium Foundation and the estimated budget is $495,000 net taxes.

However, not everyone is happy with the project. Graham and Debbie Laporte, who own a cottage by High Falls said the area, “is such a beautiful place. Over the years we have seen a lot of aquatic and wildlife in the falls area including a healthy number of Blanding’s turtles (which are an endangered species).”

“I have gone on many hiking trips with my grandson to catch frogs and fish,” said Mr. Laporte. “But with the heavy machinery in their now, it has destroyed the habitat for the turtles and many other aquatic species. Trees have been taken down when part of the ledge was broken off during construction.”

“Cement has been installed on both sides of the riverbed,” said Ms. Laporte. “They have removed the earth and overburden around the falls and dumped this over the falls with no disregard to what happens to anything below it. It is devastating, it looks like a moon scape.”

“Everything has been stripped off all the plants and cat tails,” said Mr. Laporte. “And they have stripped the riverbed to the rocks and all the trees in front of the cascade falls.”

“The municipality is creating a tourist bridge across the two links with picnic tables,” said Mr. Laporte. “I was absolutely horrified when I looked at it the first time with the construction going on.”

“I know that one of my neighbours transferred turtle eggs that had been at the river to a pond on his property so they will be safe,” said Mr. Laporte. “I called the MNR (Ministry of Natural Resources) tip line about the situation.”

“We the members of the public were never notified of the development taking place,” said Mr. Laporte. “Why was the community not made aware of what was going to take place?”

“I think the real story is that there is such beauty on the Island, and it should be preserved,” stated Mr. Laporte. “Imagine if anyone wanted to do something like this at Bridal Veil Falls (in Kagawong). There would be an uproar.”

“We are worried about the aquatic and wildlife damage to habitats, and our privacy with people coming through,” said Ms. Laporte. “There are no trails there, but there are numerous people that walk in the area and ask for them (trails). Maybe there were trails 30 years ago but they are all gone now.”

“It’s going to be one of the new attractions being created for Highway 6 in the municipality,” said Mayor Ham. “With the new pedestrian bridge people are going to be able to walk over the falls. When they travel across, they will be looking down at the falls,” said Mayor Ham. He said originally the contractors would be done by mid-September but there have been tremendous holdups as they haven’t been able to get the materials they needed to do the work, so the project has been delayed.

“This is the right time to do this work because the water over the falls has dried up,” said Mayor Ham. “It should look really nice and be a real attraction once the project is complete.”

Alton Hobbs, Assiginack CAO has confirmed the township obtained permits from the MTO for the work to be carried out.

Jaclyn Lytle of the MTO told The Expositor last week that High Falls Road would be the municipality’s jurisdiction. “I checked with our structural engineer team, and they indicated the minister does not normally have jurisdiction on municipal property, but there would still be standards that need to be followed, although it does not necessarily fall under the MTO.”

Derrick Luetchford, of the Ministry of Natural Resources (MNR) told The Expositor, “we have no role in the work being done. The falls are within the municipality and is being done through the municipality and because of the type of work being carried out, no approvals have to be provided by the MNR. It is only on Crown land where we would get involved in something like this.”