“They did extremely well,” stated MSO coordinator Janet Anning. “Sandy Graham was the head coach for our team and they earned 27 medals, which is amazing. We just started practicing again on May 14.”

Ms. Anning pointed out Matthew Bedard had been training for the World Winter Games in 2020 and 2021 with coaches Kathryn Tipper and Steve Redmond. “And Austin Featherstone had been training as a marathon runner, “so the two members of the Manitoulin Striders team had been in really good shape through training. But the rest of the team had not practiced prior to May 14. They posted amazing results.”

Austin Featherstone took first place in the mens’ 30- plus division, in the 10-kilometre run.

Michael Cormier, competing in the mens’ 30-plus division was first in the mini-javelin 400gr throw, third in both the 100 and 200 metre run, and fourth in the shotput.

Norman D’Aoust brought home three gold medals in the mens’ age 30-plus division. He was first in the 100- metre run, min-javelin 400gr throw and the softball throw.

David Gagne, in the mens’ 30-plus division, took first place in the mini-javelin throw and was second in the softball throw.

Aaron Nickol, in the mens’ 30-plus division was first in both the softball throw and standing long  jump, and third in both the 100 metre run and mini-javelin throw.

William LeClair, competing in the mens’ age 22-29 division, earned gold medals for being first in both the 200 metre run and long jump. He was third in the shot put.

Bruce Vanhorn earned a gold medal in the mens’ 30-plus age division 200 metre run. He placed second in the 100 metre run, softball throw and min-javelin throw. He also brought home a bronze medal for finishing third in the standing long jump. 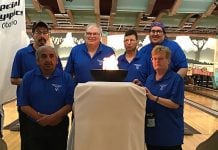