No marine mystery captures Manitouliners’ imaginations quite like the legendary, still-unsolved puzzle of the great French ‘galliot,’ or brigantine, ‘Le Griffon.’ The French captain and adventurer, 35-year old René-Robert Cavelier, Sieur de La Salle–depicted in engravings in a long, curly wig of the era–was not aboard in 1679 when the first commercial ship ever to sail the Great Lakes, built by his French shipbuilders above Niagara Falls on the Niagara River and loaded with furs, sank beneath the waves on her maiden voyage.

Three hundred and fifty years ago this year, somewhere between Green Bay, Michigan and Montreal, or, as any Islander can tell you, just off Manitoulin’s West coast and its infamous magnetic shoals of the Mississagi Strait near Meldrum Bay, the Griffon met her doom.

Curiosity has never waned in “the Greatest Mystery of the Great Lakes,” but to this day the tangled enigma of the Griffon’s watery grave remains far from deciphered.

In the 1800s, tantalizing pieces of an ancient ship were uncovered near Manitoulin’s most western outpost close to Mississagi Strait Lighthouse: big white oak beams fitting the dimensions of the Griffon, huge 17th century French-made iron bolts and spikes and other flotsam.

The first keeper of the lighthouse, Albert Cullis, later stumbled upon a cache of treasure beneath upturned tree roots on the shoreline south of the wreck: a tarnished silver watchcase on a long chain and some square and triangular brass or copper coins with stamped dates from the 1600s. Looking around, Mr. Cullis saw a leaning slab of limestone forming the mouth of a small cave; ever more curious, the light keeper’s eyes lit upon “three skeletons lying side by side.” Running back to the lighthouse and enlisting two helpers, Mr. Cullis returned to the cave to resume searching; the men were rewarded with more coins, shipbuilders’ tools and two cannon rams. One skeleton, described as “gigantic,” fit the description of one of the Griffon’s crew called Lucas the Pilot–although no-one at the time had ever heard of the ship nor of its dramatic end. Three more skeletons were found in another small cave by searchers from Gore Bay; they knew that on LaSalle’s ship’s ill-fated voyage there were six crew.

Many have been the claims over the years–in Canada and the USA–of having located the wreck of this tall, square-masted ship, but none have yet proven to be the Griffon, and none have found skeletons, never mind the exact number that comprised the Griffon’s crew.

And many have been the stories. In 1925, Ohio native Frank H. Myers, President of the Manitoulin Historical Society, was told by descendants that early settlers had chopped up the timbers to get the iron spikes for harrow teeth and burned them to melt the lead for bullets and weights for fishing nets. A coffee can almost full of brass buttons collected in the first cave and kept on a shelf in the old foghorn plant at the lighthouse disappeared when the plant burned down.

At the Net Shed Museum in Meldrum Bay, the legend is kept alive in a display of artifacts that were found in the area, said to be from the era of the Griffon. The skeletons–the ‘giant’ skull–and the other artifacts were all lost long ago in episodes of remarkable carelessness, but the remaining ancient iron nails and a huge, hand hewn beam can still inspire a daydream.

On the museum’s wall is a reprint of a 1955 article by George R. Fox in The Beaver (the Hudson’s Bay Company’s magazine that chronicled historical events) that makes a good stab at proving it was indeed the Griffon that perished near Meldrum Bay:

“The following characteristics seem to confirm the theory that the timbers in the Mississagi Straits are from “Le Griffon”:

The characteristics of the white oak of which she was built; the huge size of her timbers; the size of the wrecked ship being identical with the “Griffon”; the flatness of the bottom and the presence of grounding keels; the absence of trenails; the hand-made broadside nails; the long iron bolts, the nuts and the old method of threading; the sulphur and phosphorus in the iron; the use of lead in caulking; and the known length of time the wreck lay in the Mississagi Straits.

Unless it can be shown that someone built a ship on the Upper Great Lakes before 1790 that includes all these characteristics—-then this wreck is La Salle’s “Griffon.”

This year, the Discovery Channel aired an episode of their series, ‘Expedition Unknown,’ filmed in part at the Mississagi site of the wreck off Manitoulin Island. Featured are Cris Kohl and Joan Forsberg, Canadian and American divers and Great Lakes historians, publishers of ‘The Wreck of the Griffon: The Greatest Mystery of the Great Lakes;’ in it they make a compelling case for the Mississagi Strait theory of the ship’s sinking. The painstaking research and investigations of the author duo have produced the most thorough work yet on the unsolved centuries-old maritime mystery, generously illustrated with historical and modern photos and maps.

Commissioned by Louis XIV (France’s lavishly bewigged, gowned and jewelled ‘Sun King’) to claim the Mississippi River for France, La Salle left his ship and its valuable cargo of pelts in the command of a subordinate in order to go exploring – was it overweening ambition that doomed the ship?  Was it a combination of political machinations, money and internecine conflicts of the day that brought the Griffon down? Or a final, fatal cocktail of an intense four-day storm and the pull of unseen, dangerous magnetic reefs? And where, o where, did ‘Le Griffon’ go down?

The Net Shed Museum, Meldrum Bay. Open every day except Monday during July and August, 12 to 4 pm and 7 to 9 pm.

The Gore Bay Museum’s collection of ‘Griffon’-era artifacts is closed until further notice for museum repairs.

‘The Wreck of the Griffon: The Greatest Mystery of the Great Lakes,’ by Cris Kohl and Joan Forsberg, is available in the Expositor Bookstore.

The Manitoulin Expositor has published extensive reports on developments in the search for the Griffon–use the search bar on the homepage at manitoulin.ca for further detailed information. 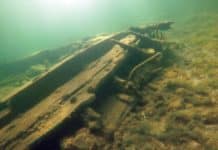 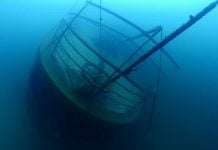 TV special on Le Griffon shipwreck to air in May