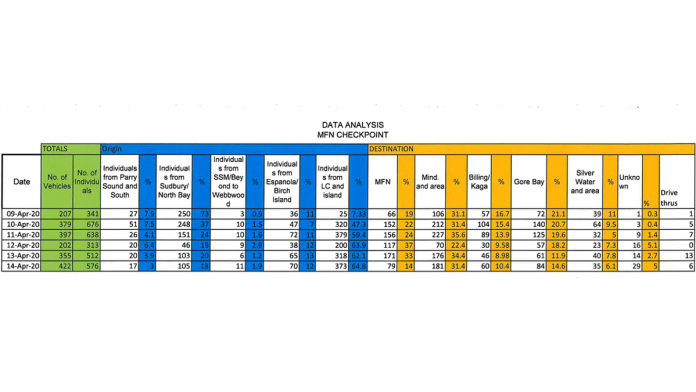 M’CHIGEENG FIRST NATION—Data from April 9 to 14 from the M’Chigeeng First Nation Highway 540 checkpoint has revealed that almost half of the drivers stopped were from off-Island.

Over those six days, 3,056 individuals were counted, 1,441 of them were not from Manitoulin Island.

When asked for their purpose in travelling, a startling number of drivers revealed to the checkpoint volunteers that they were on their way to “camp.”

Rumours that the M’Chigeeng checkpoint will lead to a full highway closure are unfounded, The Expositor has learned.

The checkpoint volunteers request that drivers who are stopped be respectful as they are attempting to get a sense of how many people are not abiding by the province’s ask for Ontarians to stay at home.