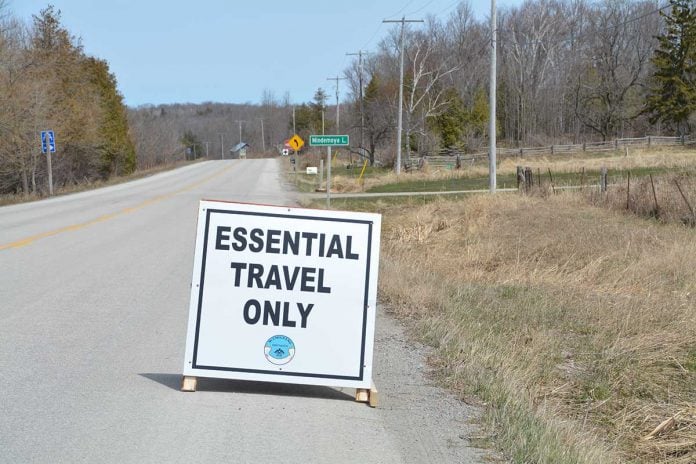 M’CHIGEENG—On Wednesday, April 29, M’Chigeeng First Nation Ogimaa-kwe Linda Debassige distributed a memo to Manitoulin municipal leaders that shows what benefits there are to complying with her calls to declare a state of emergency.

As was reported this week, M’Chigeeng, itself under a state of emergency, enacted a travel restriction for travellers coming through the community’s territory on Highway 540 and Highway 551.

Today, Ogimaa-kwe Debassige said M’Chigeeng would be implementing a resident travel pass to allow passage through her community.

Residents of those communities must fill out an enrolment form which requires name, address, phone number and vehicle information, including licence plate number, as well as signing an acknowledgement form of M’Chigeeng’s protocols.

Further correspondence from Ogimaa-kwe Debassige to Manitoulin’s municipal leaders states that, “There is a growing need for everyone to start taking this matter more seriously in how we effectively protect Manitoulin Island during this global pandemic. In M’Chigeeng we were both shocked and very pleased that Billings had declared a state of emergency and are taking this matter seriously. We all know that this virus is going to get here and will have major impacts to our communities.”

“We have instituted a non-essential travel ban in our community, which we have done so legally,” the ogimaa-kwe continues. “It does create an inconvenience; however, the reality is that the pandemic itself has created far greater inconveniences. For those who are unaware, Highway 540 through our community was never ceded to the province.”

“I continue to urge you all to declare states of emergency due to this public health crisis and to have greater ability in the future to work together to combat this virus, support the health care system and preserve human life,” she adds. “We are still willing to set up a non-essential travel checkpoint at the bridge and our offer still stands. We are willing to work with other communities who declare states of emergency and their permanent residents within those areas.”

The Northeast Town and Central Manitoulin have both said they would not be declaring a state of emergency at this time.