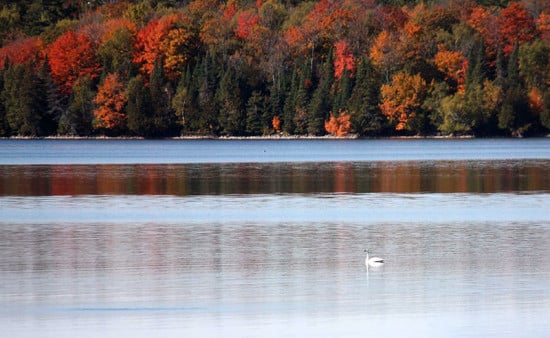 KAGAWONG—Several measures are going to be put in place that will hopefully curtail the concerns with low water levels on Lake Kagawong this past summer after a meeting was held last week involving representatives of the township, Oakville Enterprises (which operates the hydro-generating plant in the township), the Ministry of the Environment and Ministry of Natural Resources and Forestry.

“All in all, Oakville Enterprises is willing to work with us and committed to making this partnership work,” stated Councillor Sharon Alkenbrack at a Billings council meeting this past Monday. She explained the company has put in place one person to basically operate and monitor the hydro generating plant and that another person has been hired to monitor the dam in relation to the water that flows over the Bridal Veil Falls spillway. “It’s great that they are being supportive, but we as a community have to watch as well,” she said. “We can’t allow the water levels to go down like they did this summer. Continued dialogue needs to take place between the company, local citizens and council.”

Oakville Enterprises, “as the lease holder, has the most things that need to be done to comply with the water management plan and to follow up on. But we as a municipality need to keep an eye on what is going on as well,” said Councillor Brian Parker.

“At the meeting we discussed some of the concerns and complaints we have seen and heard about,” said Councillor Parker. He pointed out the company has hired a consultant, as well as CIMA+ to work and monitor the generating plant and the dam.” He explained with the dam, beaver debris has helped to block water flow. “They wanted the township to do the work to clean this up but it is still part of the company’s lease with the township.”

“One of the concerns that was raised and we received complaints to do with the low water levels,” said Councillor Parker. “We talked about the occurrence in July, where we and the MNRF had received several complaints from the public regarding low water levels. It was found that the plant had been operating at water levels below the rule curve and the incident had been ongoing for 16 days before the company notified the ministry (natural resources).”

“They didn’t shut down the plant at the time, and they continued to draw water for 16 days,” said Councillor Parker. “Oakville indicated they plan to take care of this from now on, and will have the lake surveyed again with double the staff gauges to be established (with the first two to be installed at the dam, two at the canal and two at the lake).”

Councillor Parker said the company, through the MNRF, is going to resurvey the water levels and the lake staff gauges.

“We were also told at the meeting automatic water gauges markers on the lake failed,” said Councillor Parker. He pointed out one of the gauges is at the Lakeshore Road culvert, but it freezes, and the company will be getting rid of it altogether.

“I also asked about snow pack readings and they said they don’t measure the levels by this,” said Councillor Parker. “They said they judge the water levels by the volume of the lake.” He pointed out another application is going to be made by the company to the MOEE for the permit to take water.

“We also asked what has been addressed in the letter the MNRF had sent to the company in August on the water level concerns, and they said they are working on everything with the MNRF and MOEE as well to address these,” said Councillor Parker. “The company will be responding to everything that was outlined in the letter.

“The MOEE (reps) said if the company is found not to be in compliance with the regulations they and/or the MNR can and will lay charges, but they would prefer to work together to solve issues,” continued Councillor Parker.
Local resident and businessman Bob Clifford said, “council has reached out to work with us. If the first gauges aren’t in place in November, you will hear from us. We appreciate Kathy (McDonald-Billings clerk) and council working with us, but we are still going to keep everyone’s feet to the fire until everything is back on track.”

It was further pointed out the information on the readings being taken on the lake levels will be available on the Oakville Enterprises website and forwarded to the township site as well.

Councillor Parker noted, “at the meeting last week Kathy asked for the township to be kept in the loop on everything. We haven’t been in the past. If there are any concerns we want to know.”

Mr. Clifford stated “if everything gets set up and the water levels are still below the rule curve, you will definitely hear from us.”
Councillor Barb Erskine inquired as to what is happening with the Kagawong Lake Standing Advisory Committee.
“It is still there,” said Councillor Parker. He suggested a councillor, along with Ms. McDonald and the mayor, be on the committee, and “council needs to be chairing the meetings.”

Councillor Erskine asked as to the number of meetings that would take place and Councillor Parker suggested this be set at the call of the chair. “That’s good. I think there should be a couple of meetings a year, at least, with one in the spring, she said. “There has to be dialogue between the new council and Bob (Clifford) and the committee.”

It was further recommended the Action Kagawong Watershed Association needs to be part of these meetings.

“There has to be dialogue between the new council and Bob (Clifford) and the committee,” said Councillor Erskine.

“There has to be proper dialogue on complaints, as a partnership,” said Councillor Alkenbrack.