﻿M’CHIGEENG—Members of the 348 Manitoulin Royal Canadian Sea Cadet Corps were recognized for their tremendous efforts in the past couple of years (especially having to endure the pandemic) at the 18th annual ceremonial review held in June at Manitoulin Secondary School (MSS).

Commanding Officer Lieutenant (Navy) Sylvain Boucher stated, “Congratulations on a job well done today, cadets. For those going through your first review, it can be intimidating but all of you  handled this very well. I am very proud of you.”

“It is nice to see all the cadets here in person,” said Mr. Boucher. “Holding meetings virtually has been an experience and one you will always remember, for sure.”

“I would like to say congratulations to all the cadets on a great review,” said reviewing officer James Killeen, Chief of Police for the UCCM Anishnaabe Police. He said being a member cadet in the Sea Cadet Corps “teaches you leadership, dedication, honesty, and integrity. And no matter what rank have, you are all in this and work together. You can’t do this alone. Congratulations to all of you.”

After the opening, including the Ship’s Company falls in, the national anthem, a moment of silence was given for all past and current members of the Canadian Forces. “We are honoured to have the UCCM Anishnaabe Police Chief of Police James Killeen as our reviewing officer for today’s ceremony,” said Naval Cadet Administration Officer Daniel Bussieres.

The Parade then marched off, followed by Naval Cadet Administration Officer Bussieres providing a short history of the Royal Canadian Sea Cadet Corps.

The inspection review was conducted, followed by a cadet display of Semaphore led by Chief Petty Officer (CPO1) Dayna Beauchamp who would display the letter that the sea cadets would display. Semaphore is a method of visual signalling, usually by means of flags or lights, to help signal between distant points or between ships. Using flags, the ship’s company spelled out, “Have a Great Summer.”

The cadet awards and presentations were then made.

The top senior cadet, to the cadet who has shown dedication to achieving high level of drill, deportment, dress and discipline was presented by Acting Sub-Lieutenant (ASLT) Tina Davidson to Petty Officer first class 1 Rhys Allison.

Reviewing officer Killeen presented the Lord Strathcona Medal to PO 1 Rhys Allison. Mr. Bussieres explained, “the Lord Stratchona Medal is one of the highest awards that can be granted to a cadet. It demonstrates all that Lord Strathcona himself personified: hard work, dedication, service to Canada, excellence in all pursuits, vision, perseverance, and intelligence and a focus on stewardship of our country, it’s health and vibrancy and that of its youth.”

“The recipient today has been singled out amongst his peers for outstanding performance as a cadet,” said NCdt Bussieres. “For demonstrating proficiency in physical fitness and marksmanship, as well as dedication to the program and their country; for demonstrating the qualifies of Lord Strathcona and lending their own personal legacy at this corps and within the community through their service, for performance, example and excellence as a cadet.”

The Fred Nesbitt Award for most improved cadet was presented to Petty Officer Landon Aelick, by NCdt Daniel Bussieres. “This cadet has shown the most overall improvement in drill, deportment, dress and discipline.”

The George Bury Memorial Award Fidus Amicus (A True Friend Award) was presented by retired Chief Petty Officer Lauren MacKay to PO 1 Rhys Allison. The selection is made by secret ballot by the cadets themselves.

The Ed Kift Esprit De Corps Award was presented to PO Lydia Pennings. The award is presented to a cadet who significantly contributes to the feeling of pride, fellowship and loyalty shared by the cadets.

The Jeff Marshall Outstanding citizenship award was presented by ASlt Tina Davidson to PO1 Savannah Crack. “This award is given to the cadet who exemplifies the cadet program’s commitment to volunteering within our communities.”

The Top  Marksmanship Award was presented by Lieutenant Navy (retired) Denis Blake to PO1 Rhys Allison. The award is presented to the cadet who consistently achieves the top score in both practice and competition.

Manitoulin Naval President Bob Jewell said, “I would like to thank everyone for coming out here today. It is nice to see all the parents and their children here. Congratulation to the cadets who had to go through the pandemic. You had to stick with your training, mostly virtual, and demonstrated true perseverance and commitment.”

“To all those cadets I haven’t actually had the pleasure of meeting, welcome aboard,” said Mr. Jewell. “It has been 50 years since I was a cadet but everything you learn here will stay with you the rest of your life. If I had any advice to give, it would be as you go through the program and are promoted, you will have more authority and if you do, share with the other cadets your respect and encourage them. I would also like to thank the Naval League members who are all great volunteers. And our officers are a great bunch. We need to appreciate them for what they do, they value your children and that’s why they are doing what they do.”

LtN Boucher said, “I would like to thank the Legion branch for everything you do for this program. And our staff, which is small but puts in many hours and lots of commitment so there may be a cadet program on Manitoulin Island.”

“Every year, we always have to say goodbye to at least one cadet. Our Coxswain Dayna Beauchamp has been with us six years,” said LtN Boucher. “We are very proud of you as you move on in world and in life.” He and Mr. Jewell presented Coxswain CPO1 Beauchamp with a shadow box and pewter mug, indicative of her accomplishments as a cadet and her retirement.

“We would also like to acknowledge the help here today of our review officer,” said Mr. Boucher in presenting Mr. Killeen with a beautiful paddle. 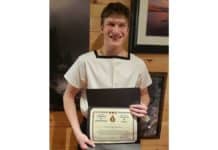 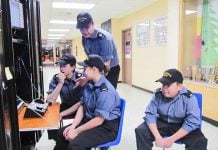