GORDON—The team of Shelley Croft and Pam Cowan are the championship flight winners in the Manitoulin Island Country Club (MICC) ladies scramble championship. They posted an 18 hole score of 78 to take the championship in the tournament, held this past Saturday.

“We would like to thank all of you for coming out this year to take part in this tournament,” said Dan Marois, master of ceremonies for the awards ceremony held after a delicious dinner was enjoyed by all. He noted, “we had lovely weather, especially for September 30.”

Mr. Marois acknowledged the efforts of the MICC groundskeepers for having the course in such great shape and to Myrna Thomas and her kitchen staff for the terrific dinner and hospitality.

The winners of the second flight in the tournament was the team of Merle Thirkill and Sharon MacDonald.

Special prizes were won for closest to the pin, won by Allison Idle, and longest drive, won by Claudette Roy.

Clubhouse manager Myrna Thomas thanked everyone who participated in the tournament and said, “I hope everyone had a good time.”

There were a total of 34 players taking part in the tournament. 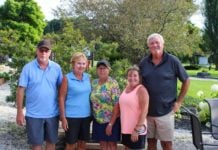 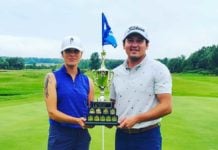 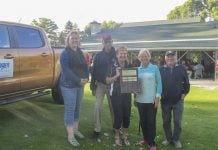