MINDEMOYA – The Mindemoya Hospital Auxiliary has now served the hospital for over 50 years and over that time, and with the support of the community, the members of the hospital auxiliary have raised over $1 million to help support the local hospital.

“The Mindemoya Hospital Auxiliary is now 50 years old,” said Judy MacKenzie, president of the group at its annual spring luncheon, bazaar and bake sale held at the Mindemoya Community Hall, last Saturday. “Fifty years ago on a Thursday evening on May 1, 1969, a meeting was held for the purpose of organizing a women’s auxiliary for the new Red Cross Hospital. An executive was formed and area units were also formed. It was recognized that various needs of the patients and some equipment was not forthcoming under government grants. And, as the saying goes, the rest is history.”

“Yes, I’m very happy I joined the hospital auxiliary,” stated Joan Beard, the current longest serving member of the local hospital auxiliary (20 years). “It has been very worthwhile,” she said as she manned the flower/plant sale vendor booth at the event held this past Saturday. “The funds we raise certainly goes to a good cause, over $1 million over 50 years.”

Ms. Beard explained, “I have been a member of the hospital auxiliary for the past 20 years. I came from Espanola, moved here and attended my first meeting in September 1999. Mary Ann Pilon, who had been on the nominating committee, had called me and asked if I would like to be a member of the hospital auxiliary. She said the auxiliary was going to have an election then she asked if I would be the secretary, which I had never done before. I told her I had been the treasurer of the Espanola Hospital Auxiliary, and two minutes later she said Mary McGauley would be willing to give up the position of treasurer for me to take over. I continued this up to three years ago.”

The Manitoulin Red Cross Hospital Women’s Auxiliary was formed on May 1, 1969. The executive included Mary McQuay as president, Jessie Gray as secretary, Julie Chisholm was the treasurer, Toots McDermid the first vice-president, and Barbara Runnalls, the second vice-president.

Memberships were to be sold at $1. On July 31 there was a bake sale held and on December 6 there was a tea and bake sale. May 10, 1970 was the opening of the Mindemoya Hospital. The minutes also reveal that eight folding chairs ($6.98 each) were purchased. A folding table and chairs were bought for the children’s ward. Treats were put on Christmas trays. As well, the auxiliary made a commitment to purchase a heart defibrillator.

In the spring of 1970, Mindemoya’s new hospital officially opened its doors. The modern one-storey structure was built at a cost of slightly more than $500,000. The new facility included a maternity ward, children’s ward, three operating rooms and central admitting. A change in ownership occurred in March 1978, as the nuns of St. Joseph’s Hospital terminated their service. The Manitoulin Health Centre Corporation was formed. 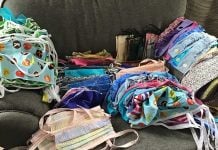 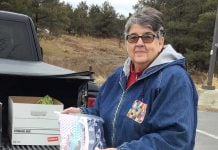 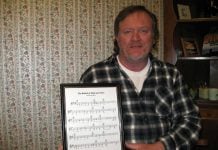 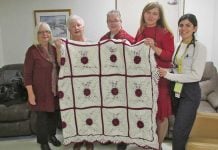