SHEGUIANDAH—When Joanne Wade opened her door on a chilly November day more than a decade ago she found two police officers and a member of the clergy waiting for her, faces grim.

Her 22-year-old son, Brent, was dead. While at work, his truck was hit by a train at a poorly marked railway crossing.

“I remember plain as yesterday the wrenching pain in my stomach,” Ms. Wade tells The Expositor nearly 13 years later. Her son would have turned 35 earlier this month. “You can’t even imagine the pain. It’s beyond belief.”

She explains she remembers collapsing and yelling ‘It’s a mistake! It can’t be true.’ She remembers searing anger burning through her, anger that directed itself at God and the world in general.

And she says she remembers the empty, dead feeling.

It was early in the day on November 9, 1999 in Acton, which is about midway between Brampton and Guelph. Brent had worked at the job for more than a year at this point, found a nice place to live and had a girlfriend. He was happy, smiling, and bright.

“He had such a vim for life,” his mother says, a sad smile on her face.

Brent was driving a heavy truck up an incline and was shifting gears as he reached the top. At the top was a Via Rail train crossing. The crossing was marked only by a red-and-white X sign, and brush obscured the tracks to the left. With the loud noise of industrial-level gears shifting in his truck blocking Brent’s ability to hear and with the early morning sun and trees obscuring the train from sight, Brent drove onto the tracks just as the train crossed.

Despite several close calls over the prior years and Brent’s tragic death, the crossing wasn’t improved. There were no lights and there were no crossing bars.

With the coming of spring, the raw wounds around the aching hole in her heart left by Brent’s absence in her life was starting to heal and life was becoming bearable, Ms. Wade recalls. On April 20, Ms. Wade returned home to hear the phone ringing. She was barely able to reach the phone before the caller hung up. It was early in the day, around the same time of day she had found out Brent had died a mere half-year earlier.

“I remember this so clearly,” Ms. Wade tells The Expositor. “A voice asks, ‘Are you Brent Wade’s mother?’ I answered yes, and he asked me, ‘How do you feel about the three teens who were killed this morning at the same crossing where Brent died?’ Just like that. No warning.”

She remembers the pain today, almost 12 years exact to that day, like yesterday. Six months after her son died, she remembered the pain of his loss like she had just had him ripped away from her.

“I was hysterical,” she relates. “I told him I had no comment. I needed to calm down and pull myself together, and I wanted to talk to the families.”

She says she wanted to talk to the families because, unlike most everyone else out there, she knew exactly how they were feeling. That sort of support was something she and her family had lacked in the days, weeks, and months after Brent had died.

“We’re still friends with one of those families today,” Ms. Wade notes.

If there is any good to be had out of the four deaths, the railway crossing that proved so deadly is now marked with lights and now is barred when a train is coming.

“It took four crosses to get those bars,” Ms. Wade adds, her voice somewhat bitter.

Through her work at the Centennial Manor in Little Current, Ms. Wade found out about a project called the Quilt of Life. She managed to become involved with it early in its existence, and today her son Brent and his life is memorialized as a square on a quilt that pays homage to those who have been killed, or maimed, in a workplace accident.

As she and the others involved gathered to discuss the quilt, they decided to form a group to advocate and educate about workplace and occupational safety and health. That group is the Threads of Life.

She has been involved since the organization’s inception and now acts as a volunteer family guide, reaching out to families experiencing the loss of a family member.

“For three years I facilitated the palliative care course,” Ms. Wade notes, shaking her head in chagrin. “It’s about pain and loss and coping with it. After I lost Brent, I asked myself what I was doing. How can I teach a course like this without understanding the pain? I understand it now.”

Threads of life helped her cope with the grief and loss surrounding Brent’s death and helped her remember that life goes on.

“Through Threads of Life I’ve had a venue to grieve,” she explains. “Not just myself, but all members. We all help each other grieve.”

She said that because everyone in Threads of Life has lost someone close to them, it is a safe place for people to share their pain.

“No one is made to feel guilty for having feelings, whether it’s grief or anger or anything else,” she says. “Some people feel guilty because they feel they should be ‘over it’ or should be moving on. Grief isn’t that simple.”

The peer support is the first ‘reactive’ action that Threads of Life performs. The second is ‘proactive’ and consists of educational and lobbying activities.

“We go into schools and workplaces and share our stories,” she tells The Expositor. “We hope that by sharing our stories, people will listen and realize they are not immortal. It could happen to them. We tell the kids about the choices they have. They’re scared of losing their jobs. They don’t realize they can refuse work if it’s dangerous. And we want to reach the longer-working employees and employers who are complacent.”

The organization’s lobbying efforts have resulted in changes in the workplace and in law.

“One of our members lost her husband when he was killed by a car while working on a road construction site,” Ms. Wade relates. “Our lobbying led to the double fines for speeding drivers in a construction zone.”

The crossing bars at the tracks where Brent died is another Threads of Life lobbying success.

She shares a story of a workplace accident survivor, who had worked in a wood processing plant. One evening, he and a co-worker were servicing some of the equipment. The employee had called back to his co-worker to ask if the power was off. Hearing what he believed was an affirmative, he stepped into the equipment’s chamber to service it. Normally, wood-products would fill the chamber and its weight would activate the blades that cut it up and ground it down to make wood pulp.

Since the power was still on, the machinery believed the worker’s weight was wood product and the blades activated. By the time his co-worker had cut the power, the blades had mangled the victim’s legs and he was hung upside down from the blades.

“They were supposed to clean the area, too,” Ms. Wade recalls of the story. “They hadn’t, so the place was covered in sawdust.”

Despite blood loss and agony, the victim remained conscious—which was good, as no one else knew how to get him free. He told the emergency response crews how to cut him free, but as they started to cut, sparks ignited the wood byproduct and dust that hadn’t been cleaned up.

“He was lucky to get out alive,” Ms. Wade quietly says. “Power lockouts are now required on heavy machinery. She explains that now, two employees must physically turn a lock to turn off power on equipment before servicing.

“This fellow survived his ordeal,” she notes, “but his legs are majorly disfigured. But he has his feet and he can walk.”

The first week in May is the North American Occupational Safety and Health (NAOSH) week. On this Saturday, April 28, the nation remembers people killed, maimed or suffering from disease from workplace accidents or occupational risks with the ‘Day of Mourning.’

“No one on Manitoulin really knows about the Day of Mourning,” Ms. Wade says. “It’s a good thing and a bad thing that we don’t really have to celebrate it here.”

She is speaking on Friday to staff at the Centennial Manor in Little Current about Brent and workplace safety.

“Many people don’t register that even ‘safe’ jobs have their risks,” she notes. “Healthcare workers often suffer from terrible back injuries from moving and lifting patients, for example.”

On May 5, she will travel to Sault Ste. Marie for the Steps Of Life walk, the only fundraiser the not-for-profit holds. There are more than 40 walks taking place in Canada on that day.

“The money goes to helping our members,” Ms. Wade says. “It helps bring us together for our annual meeting so we can comfort each other. It helps us bring about change in the workplace.”

The organization, which started in 2002 in Ontario, is now nation-wide and split into three divisions: west, central and east.

“It was started by Shirley Hickman, Rob Ellis and Paul Kells,” Ms. Wade tells The Expositor. “They felt there was a gap in the social services offered for people impacted by occupational injuries and deaths.”

She knows through Threads of Life she has made a difference, something that helps ease the grief of her lost son.

“I remember speaking at a school once,” she relates. “They scheduled me right after lunch and I’m watching these Grade 10 kids from all over the Rainbow School Board be rowdy. They’re laughing, they’re talking, there’s friendly shoving, and I thought they wouldn’t listen to me.”

“And as I watch them, I realized Brent is here. Brent is here, in them. So when I stood up, I put aside my speech and I told them that. ‘You are like my son. I can see him in you all. I can see Brent as a Grade 10 kid, pushing and shoving and laughing with his friends,’ and they quieted down and listened.”

She draws a steadying breath at this point, the first real sign of painful emotion throughout the entire discussion.

“Kids are full of life, vim and vigor,” she explains. “They feel immortal. Brent was all of that, and then he was dead.”

Each year, birthdays come and go. So do holidays like Christmas, Easter, Thanksgiving.

“And there’s no Brent. There’s just no Brent.”

And then she cries. It’s a heartbreaking reminder that the Threads of Life organization is one of the only organizations out there that doesn’t want new members.

For more information about Threads of Life, visit www.threadsoflife.ca. 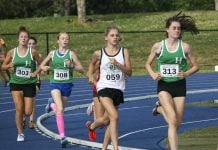