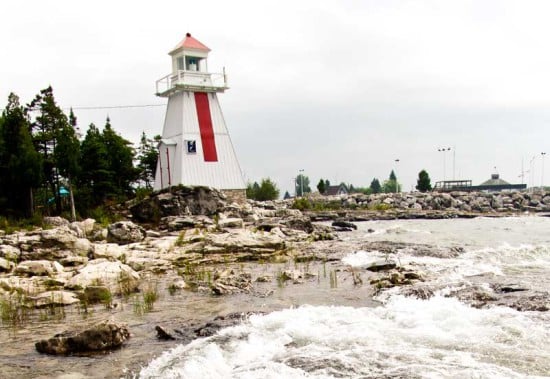 SOUTH BAYMOUTH—Low water levels in the Great Lakes are threatening the smooth passage of Manitoulin’s ferry link to southern Ontario, leading the Owen Sound Transportation Company (OSTC), operators of the Chi-Cheemaun, to engage an engineering company to survey the entrance to the ferry’s South Baymouth berth in order to lay the groundwork for deepening the channel, should it be required in the future.

“We do have an engineering firm working on it for us,” said OSTC CEO Susan Schempf, describing the low water situation as being “no small issue.”

Water levels over the winter have currently dropped to the point where the ferry could not safely transit to its berth in South Baymouth should levels not recover by spring and even when water levels do rise in the spring, projections indicate that docking in South Baymouth may be restricted to calm water conditions. Luckily, rough weather in the region is usually not seen until much later in the season.

“As it stands, I would not go in there without sounding,” said Ms. Schrempf. Although the issue is serious, Ms. Schrempf noted that water levels do rise every spring. The concern facing the company centres on whether the current trend to lower water levels continues.

The issue of low water levels has Bruce-Grey-Owen Sound MP Larry Miller sounding the alarm and his office issued a press release asserting the low water levels may prevent the Chi-Cheemaun from docking.

“Tourism is one of this area’s main industries, and the Chi-Cheemaun is a primary draw of people to the Bruce Peninsula,” said Mr. Miller. “The water in the channel is simply too low for the vessel to traverse, and service may not be able to resume in May if dredging is not done immediately.”

Mr. Miller has a reputation for a colourful approach to issues, however, and Ms. Schrempf cautioned that it is too a bit too early to hit the panic button, but noted that prudence required the OSTC to prepare the way for the future.

Algoma-Manitoulin-Kapuskasing MP Carol Hughes is also working to raise awareness of the issue with the federal government, recently bringing forward low water concerns in regards to the Chi-Cheemaun to the House of Commons, asking what the government is prepared to do for the many people who rely on the ferry’s service should low water levels ever prevent it from operating.

That time has not yet come, as Ms. Schrempf gave a comparison of the soundings for this time of year in 2003. “The water is down by 11 centimetres for the same period in 2003,” she said. “That is definitely a drop, but it is not as drastic as some are making it out to be.”

Asked if the solution to a continuing drop in water levels would require blasting a deeper channel to the berth, Ms. Schrempf was cautious. “There is no easy answer,” she said.

Before any action could be contemplated, many questions would have to be answered by qualified engineers, including the current and projected future depth of the channel. “You have to be able to provide the answers,” noted Ms. Schrempf. She indicated that there were no plans to alter ferry service at this point.

Before any dredging or blasting of a deeper channel can be contemplated, applications for permits must be submitted, and the answers to many questions have to be ready long before those submissions can take place.

Rumours of a problem with a sand bar at the Tobermory end of the run are not based on fact, according to Tehkummah Reeve Gary Brown, whose municipality recently passed a motion, echoed by other Island municipalities, calling for immediate action from the federal government to facilitate dredging to ensure safe passage of the Chi-Cheemuan.

The Northeast Town delegation at the recent Ontario Good Roads Association conference also met with Minister of Natural Resources minister David Orazietti to request the MNR increase resources allocated to permits for dredging. The minister responded that while his ministry recognizes the importance of the issue, they encourage everyone to get their applications in as early as possible.

Nothing in the process happens quickly, admitted Ms. Schrempf. This is particularly true in the case of any work to be done in a navigable waterway. In order for the OSTC to be prepared for any eventualities going forward, the company must have the data in place to support any actions that may be required well in advance of those actions taking place.

“If the water goes down another 18 inches we are going to be in trouble,” said Reeve Brown, who sits on the OSTC. “But right now we are just being proactive in looking into what would need to be done if that should happen. You can sit back and complain or you can roll up your sleeves and do something about it. We are doing what we can to make sure we are ready for any eventuality. The ferry is very important to our economy here on Manitoulin.”

Dropping water levels are coming hard on the heels of a continuing trend of lower ridership numbers. The OSTC commissioned a marketing study focussed on turning those figures around that was due to be released yesterday (Tuesday).