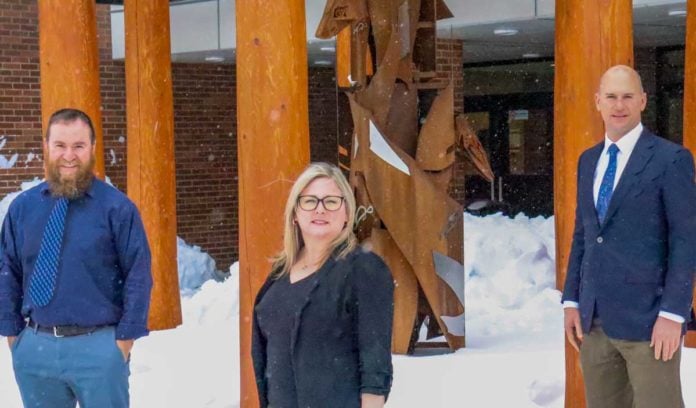 “David Wiwchar, Dawn Noble McCann and Neil Debassige have a wealth of experience in education,” said Director of Education Bruce Bourget. “With an exceptional teaching and support staff in an exceptional learning environment, they remain focused on the success and well-being of all learners.”

“With his strong roots in the First Nations community, Neil Debassige brings an important perspective to the administrative team,” continued Mr. Wiwchar. “His contribution will enhance our ongoing work in Truth and Reconciliation.”

After obtaining a Bachelor in Biology at Sir Wilfrid Laurier University, Mr. Wiwchar earned a Master’s Degree in Biology at Laurentian University then a Bachelor in Education at Nipissing University. In 2011, he was recognized by RDSB with an Award for Outstanding Contribution to the co-curricular program for his efforts in bringing solar LED lighting systems to Costa Rica with students from various Rainbow schools, including MSS. He is also a recipient of a Sudbury YMCA Peacemaker’s Award and Queen’s Diamond Jubilee Medal.

“I look forward to continuing to work with students, parents/guardians, staff and the community of MSS,” said Principal Wiwchar in the release. “It is a pleasure to lead the exceptional administrative team and the dedicated teaching and support staff committed to student success.”

Born and raised on Manitoulin Island, Ms. Noble McCann calls herself “a true Haweater” and “a Mustang through and through.”

She joined RDSB in November 2005 after gaining experience at two school boards in Southern Ontario.

“I have been a part of the Manitoulin Mustang family for almost 30 years as a student, a teacher and now in the role of an administrator. Our Island carries a sense of togetherness which makes it a unique place,” she said. “I recognize the importance of relationships and value not only the school culture, but also the culture of the communities that we serve.”

Ms. Noble McCann added, “Integrating the cultures of Island communities into the school has been critical. That work is ongoing today as we continue to learn and grow together.”

Ms. Noble McCann was also the lead teacher for the school’s specialist high skills majors (SHSM) in arts and culture and agriculture. Alongside students, she founded the Living Well Locker, a food and resource bank for students. She was appointed vice-principal of MSS in the fall of 2020.

After graduating from MSS, Ms. Noble McCann obtained an Honours Bachelor of Arts degree in communications and geography from Wilfrid Laurier University. She has a Bachelor of Education from the University of Windsor.

Another proud graduate of MSS, Mr. Debassige looks forward to inspiring the next generation to value education, set goals, work hard and achieve success in all pathways—apprenticeship, college, university, independent living and work.

“It is my truth that education is the key to the success of our First Nations across Canada,” said Mr. Debassige. “Improving outcomes for First Nations learners can only take place in a school built upon a foundation of safety, trust, respect, patience and understanding.

Mr. Debassige returned to M’Chigeeng First Nation in the fall of 1995 to join the staff at Lakeview School. He taught all subjects with a specialty in math, science and physical education to students in Grades 6, 7 and 8 and established the outdoor education program at Lakeview. The program was designed to expose students to nature, with the outdoors serving as a classroom with unlimited potential for academic and personal growth. After teaching for five years, Mr. Debassige began his Master’s Degree in educational leadership with San Diego State University.

During this time, he served as principal at Francine J. Wesley Secondary School in Kashechewan First Nation and then at Wasse Abin High School in Wikwemikong. In 2004, having earned his Master’s Degree, he assumed the role of principal and education manager at Lakeview School in his home community of M’Chigeeng. In addition to his leadership skills, Mr. Debassige has extensive experience in school improvement planning, professional development, learning communities and leadership capacity building.

He is the recipient of many awards including the Laurentian University Native Person of Distinction Award, the Indspire Indigenous Leadership Award, and most recently, co-recipient of the Meritorious Service Medal from the Lieutenant Governor in 2018 for Indigenous Education Leadership.

MSS has undergone significant renovations in the past few years, including upgrades to the building’s automation, water, mechanical and lighting systems, but has also undergone “an inspiring reimagining of the entire learning and teaching environment.”

Throughout the building, architects incorporated natural elements like cedar and limestone, as well as traditional Indigenous culture, like the four elements, cardinal points, the circle of life, and the Seven Grandfather Teachings.

Heavy timber now frames the front doors, which open to a bright and airy foyer, flooded with natural light. New wooden ceiling beams and a fireplace bring warmth and texture to the space. The redesigned cafeteria has modern round tables, café-style seating, lounge areas for conversation and quiet. The gymnasium, where new bleachers were installed, has sparkling new floors with a striking decal of the school’s long-time Mustang mascot. The school also features a new library with new technology, updated science lab, an agricultural classroom and refreshed washrooms, including a universal washroom.

The centrepiece of the renovation is the multi-purpose cultural room in the heart of the building. As a Three Fires Indigenous student space, the cultural room offers a central open area for ceremonies, smudging, drumming, storytelling, and teaching—all with a view through the main lobby to the main entrance and the central courtyard with benches, picnic tables, plants, trees and the sky above.