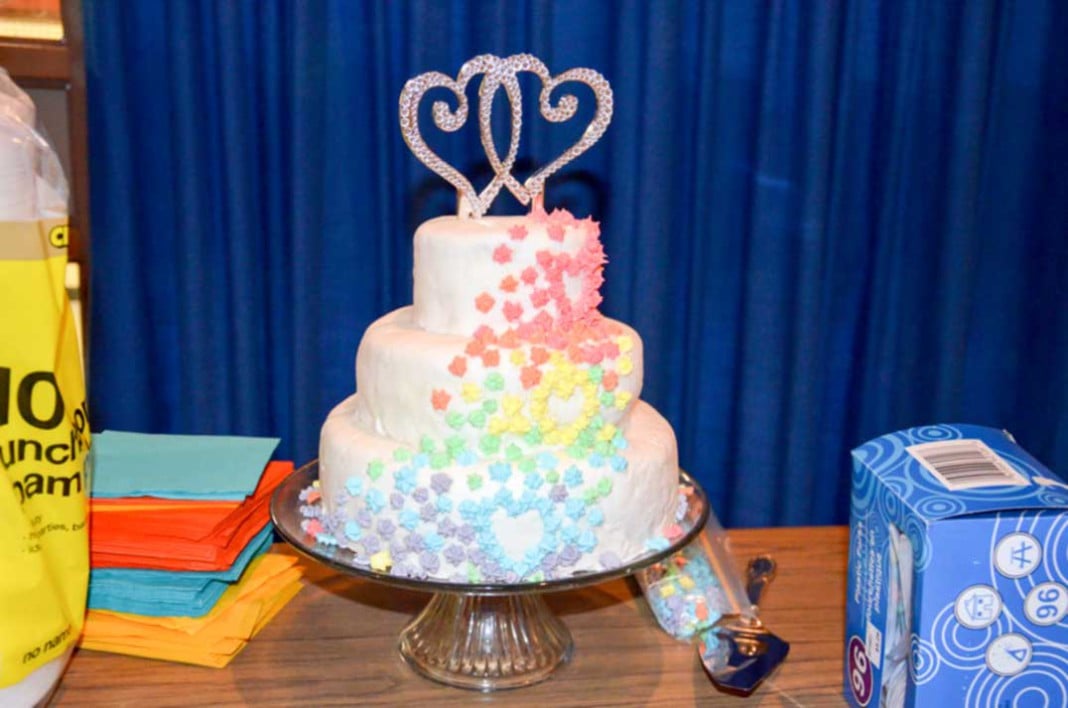 M’CHIGEENG— Former Algoma-Manitoulin-Kapuskasing MP Brent St. Denis was the guest of honour at the November 24 Manitoulin Secondary School (MSS) Pride Day, a celebration of the 10th anniversary of the legalization of equal marriage rights in Canada.

With music provided by DJ Scratchley Q, LGBT students and their allies provided a short video highlighting the joy of couples who could join in matrimony with their life-partners despite being of the same gender following the introduction of the Civil Marriage Act.

The Civil Marriage Act was introduced by Prime Minister Paul Martin’s Liberal minority government in the Canadian House of Commons on February 1, 2005 as Bill C-38. It was passed by the House of Commons on June 28, 2005 and by the Senate on July 19 of that year, receiving Royal Assent the following day.

“Hey, is this a great way to spend your lunch period?” said Alexis, decked out in a white wedding gown and backed by fellow committee members Barb (Erskine), Sandi and Denver onstage wearing the committee’s black and white T-shirts bearing the slogan “Celebrating 10 years of Marriage Equality.”

“We are the gay-straight alliance at MSS,” said Sandi. “As you may know from the talk around school, the MSS Rainbow Rights Alliance has put together this event to celebrate the 10-year anniversary of legalizing of equal marriage rights in Canada.”

“This video was created in celebration of the legalization of same-sex marriage in all 50 states of America,” said Denver. “It shows what PRIDE is all about and reminds us of the importance of legalizing same sex marriage in Canada in 2005. We are showing you this video because we want to share our pride with you.”

The video (available at www.youtube.com/watch?v=WSiehK2asbI) featured a number of clips from legislatures across the US, as well as people coming out and same-sex couples celebrating their nuptials.

The alliance members then took their audience on a short stroll through history, recalling the 1965 sentencing to four years in prison of George Klippert for “gross indecency” due to his history of consensual sex with adult men. In 1969 same sex intercourse was legalized.

“Fast forward to 2005 and Canada is deep into a national debate about legalizing same-sex marriage,” said Denver. “Led by Prime Minister Paul Martin, MPs voted 164 to 137 in favour of the Civil Marriage Act.” This made Canada the fourth nation to legislate the legality of same-sex marriage.

At this point in the proceedings, Rainbow Rights Alliance Co-chair Barb Erskine introduced Brent St. Denis, who was the Liberal Algoma-Manitoulin MP in 2005. “He voted in favour of legal rights for same-sex marriage,” she said. “We would like to thank Mr. St. Denis for standing up for equal rights in Canada and making a difference in the lives of so many Canadians. He stood on the right side of history.”

Ms. Erskine, a psychologist who has taken on the co-chair role of the Rainbow Rights Alliance for the past five years as part of her activities at the Noojmowin Teg Health Centre, noted that the encouragement of gay-straight alliances are part of the provincial government’s commitment to safe schools, “creating a safe space for LGBT youth and students and their allies to support each other.”

Rainbow Rights Alliance member and MSS student Kayla Hughson has been part of the organization for four years. “My friend was in the alliance and I thought that I would support them,” she said. “Through my journey I came out and stayed in the group.”

She said that she found the atmosphere amongst the general student population to be “very accepting,” but noted that there were still students who one could see passing the lunch room “rolling their eyes” or leaving the cafeteria when they realized what the celebration was about.

For those students who are “gay, lesbian, bi-sexual or transgender” the Rainbow Rights Alliance has been an important resource. “We go to conferences locally, talk to different public schools about the issues going on,” she said. The members also learn about important coping skills, such as coming out techniques and how to deal with the discrimination that still goes on in society.

“The LGBT group are amazing people,” said Kayla. “They are great people to be with. It has certainly made my high school experience that much better.”

Following the stage presentations, Mr. St. Denis was invited to join the Rainbow Rights Alliance members in cutting and distributing the cake before the event wound down. 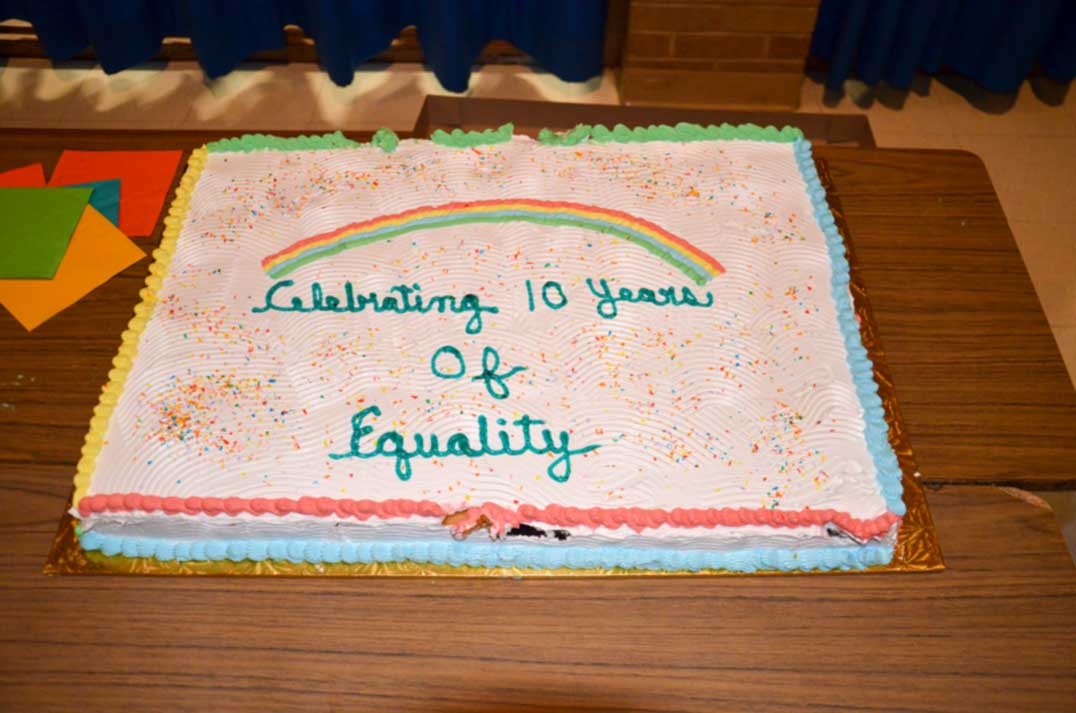 Manitoulin Secondary School is in the process of creating a transgendered washroom facility, but the construction is currently on hold.

“I think it will be a wonderful thing (when the washroom is finally opened),” said MSS Principal Laurie Zahnow, pointing out that it will be another step forward in creating a welcoming and safe atmosphere in which all students can pursue their secondary school education. 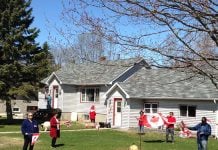