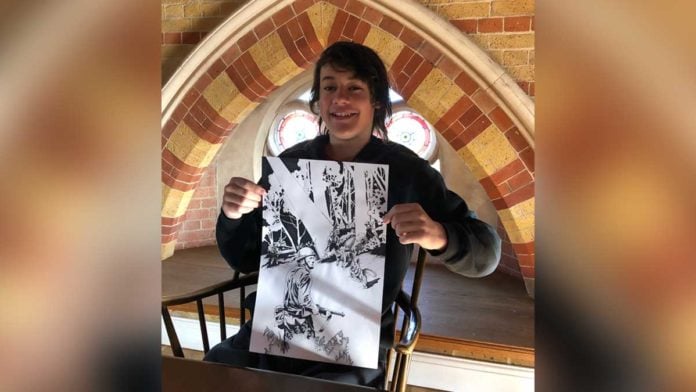 “The book idea came from a school assignment I did,” said 14-year-old Theo Behe, who is attending school in London, England. “It was 18 months ago when I was in primary school. After I visited the RAF (Royal Air Force) Memorial (in Canada) it gave me the idea that I wanted to write about my great uncle Bert.”

Bert (Albert Houle) was a distinguished Canadian RAF flying ace. “He was a pilot in WWII and had 13 kills.  My grandpa told me stuff about my uncle Bert and my family published a book about him.”

Set in wartime Canada, notably Manitoulin Island, where central character Johnny grows up learning to hunt and fly bush planes (among other things), England and Germany in 1941-1942. ‘Johnny Recruit’ is a story about hope, heroics and youthful ambition. When 14-year-old ‘Big Johnny’ learns his uncle has been captured by Nazis, he is sure the only person who can rescue his mentor is himself. A stellar bush pilot and expert game hunter, Johnny lies about his age and enlists to find his best friend. When a rival British pilot threatens to expose his secret, Johnny faces tough decisions no young kid should have to make.

Both the young writer and artist are fascinated by 20th century wars and soon after meeting, discovered they each had a great uncle named Bert who fought in WWII: Theo’s was a distinguished Canadian RAF flying ace, while Mr. Muzzell’s was a heroic soldier who spent three years in a German prisoner of war camp.

“We all have great relatives in our family trees, people who’ve lived amazing lives and done amazing things,” said Theo. “My great uncle Bert was one of them. He shot down lots of enemy planes and even got shot himself. He has made our family proud. I wanted to write some fun adventures around him and create some new characters and heroes that might match up to what he did.”

“My son Theo was born in North Bay, where I grew up as well,” said Thomas Behe. “Most of my son’s family is from North Bay, and his grandfather and family are from Massey. Some of his relatives are also from Manitoulin Island.”

Theo’s great uncle Bert was from Massey. “We were looking for a newspaper in Northern Ontario in the area where Bert grow up,” said Mr. Behe. “That’s why The Expositor is featured. Albert Houle’s descendants, his sons and nieces, etc., are still living in the Elliot Lake and Massey areas.”

Albert Houle attended the University of Toronto and was a wrestling champion. He died in Massey. In the war, he shot down 13-and-a-half Nazis (half represents shared kills) and was shot in the neck himself and met the king, Mr. Behe said. “I’m jealous he’s not part of my half of the family. When I think of movies, I think Bert was a real life superhero.”

Thomas Behe and his wife are both consultants and their two children, ages 12 And 14, are attending school in England. “The final day of school, we jump on the plane and live in Canada during July and August,”’ he said. They are half Canadian and half British.

“Theo was into that, and he was looking into it for a school project about three or four years ago. He’s done a really good job,” his father said.

Their ‘propaganda poster’ approach of linking a retro WWII comic in a black-and-white double page scenic spread fits nicely with the overall concept of the story. The term ‘Johnny Recruit’ was used by seasoned troops referring to soldiers new to the war and marketers created WWII propaganda recruiting posters using it.

The book is set in three locations. In the first quarter, Johnny is 14 years old and a big kid at six feet and 184 pounds. His best buddy is Bert. When Bert is called to the war, Johnny is upset. Later he reads an article in The Manitoulin Expositor about how Bert has been taken by the Germans as a prisoner of war and is one of the best pilots captured by the Germans. Johnny decides to go rescue Bert. He knows how to fly and knows he will be good. The first pages of the book are set in Manitoulin Island before moving to Germany and the Nazi conflict.

Tom Muzzell, the illustrator, lives in Mount Forest, Ontario. They did look at another illustrator in Canada first. “Then I saw Tom’s work on Facebook,” said Mr. Behe senior. “He started working on comics full-time when he retired. He liked working with Theo on the book.”

Mr. Muzzell said, “I love the challenge of having no words and single landscape panels to tell this story.” He’s been creating comics for over 40 years. “There’s lots of detail in the script and plenty going on each of the pages, so lots of planning was needed. And I love the topic. This book would be on my shelf even if I wasn’t working on it.”

“Two-and-a-half years ago, I retired to allow myself to pursue this full-time,” Mr. Muzzell told The Expositor. “I’ve always been involved in art, initially publishing illustrations in children’s magazines. I’ve been at this work since I was five years old. My sisters, cousins and our children are artists and musically inclined. We get this from my grandmother’s side of the family.”

“I’ve always enjoyed working on comic books, which is mostly what I do today. Life got in the way and I had to pay the bills. I never forgot my passion. I was tired of working for other people and risked not fulfilling my dream. I only have so much time left and need to do something outside of work. I wish I’d done this 10 years ago. I’m working harder but I love it. I love my life,” Mr. Muzzell added. His two passions are his artwork and physical fitness.

“When Thomas and his son Theo were looking for an artist, they tried a couple but were not happy with the results and got in touch with me. The original call was to do a sample page,” stated Mr. Muzzell. “By the end of our conversation, he (Mr. Behe) gave me the project go ahead. The story is very intriguing. I said it deserves to be a movie. It (the graphic novel) is a double page spread without words.”

“I thoroughly enjoyed working on this project,” said Mr. Muzzell. “I think I did a pretty decent job. It was a lot of fun. We’d Zoom stories back and forth.”

“I like to read pretty much everything: comics, novels, history books, Insta posts,” said Theo. “Now my friend Tom has made this story into these amazing comic pages. They’ve turned our great, just the way I imagined.”

“The comic book definitely exceeded my expectation,” Theo said. “The work that Tom did was insane; it was the perfect style.”

Theo Behe is set to become Markosia’s youngest-ever published writer. Harry Markos of Markosia Publishing had no hesitation signing the young boy to a book deal. “Markosia is all about offering great comics that explore new ideas and concepts from creators everywhere,” said Mr. Markos. “‘Johnny Recruit’ is full of emotion, energy and lots of fun. This is an exciting project, an excellent story from a very talented team.”

The book will be available online through Amazon, in print and Kindle digital format. It will also be available in print format at the Chapters store in North Bay, and at Print Shop Books at The Expositor office.

‘Johnny Recruit’ is expected to be released in May.